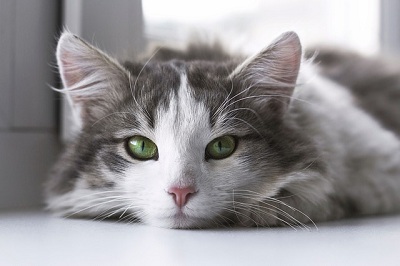 Pancreatitis in cats is a serious disease that affects cats. The causes of pancreatitis remain unknown still today. Symptoms also represent an odd territory. While some cats with pancreatitis might express obvious symptoms such as vomiting or lethargy, there are cats that do not show any symptom at all. For that reason, it is hard to spot the disease in early stage. Usually, pancreatitis is detected when a cat encounters a sudden outburst of the acute form of the disease. Unfortunately, some cats do not survive the first attack. The good news is that only 2 percent of cats will get pancreatitis during their lives. In a majority of cats with pancreatitis, acute phase is followed by a chronic form of the disease. Episodes of attacks become less intense during the time, while the pancreas is getting weaker and weaker. In return, this stage may cause other serious health conditions such as diabetes mellitus. However, not every cat with pancreatitis will end up developing diabetes mellitus. Medical evidence shows that pancreatitis completely disappears after the first bout in some cats. To prevent and detect the disease early, causes and symptoms of pancreatitis in cats as described in the article “Inflammation of the Pancreas in Cats” may help our cat a lot.

Concurrent inflammatory bowel disease or liver disease. The combination of inflammatory disease of the liver, pancreas, and intestines is so common in cats that it has its own name — “triaditis.” It is safe to assume that most cats diagnosed with one of these conditions have some degree of the other two as well.
Diabetes mellitus
Certain types of infections (e.g., toxoplasmosis or feline distemper)
Abdominal trauma
Exposure to organophosphate insecticides

Even though pancreatitis in cats represents a serious health issue, prognoses are not bad for each cat. Namely, when the illness is caught in time, the prognosis is pretty good. The problem lies in a fact that pancreatitis is the recurring illness. Therefore, many cats usually develop chronic pancreatitis after the first bout. However, older cats and cats that have experienced the severe form of illness have very poor prognosis. By knowing a cat, their behavior and habits may help us notice symptoms of pancreatitis as early as possible and prevent dangerous consequences.

Tags: Causes and Symptoms of Pancreatitis in Cats