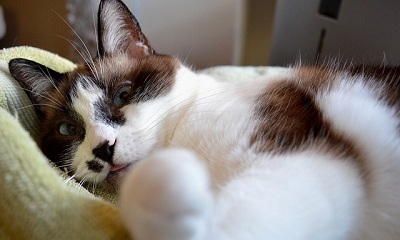 Many of us believe that grooming is a one-way street or a cat’s business. We are accustomed to the idea that grooming has only a cat as an object. But, what happens when a cat combs our hair? Is that behavior ‘normal’ or represents a form of cat weird behavior, because it is something we cannot explain? Feline experts believe that this behavior may have many causes. One of them is rooted in their experience of grooming. For many cats, grooming represents a pleasurable activity they like to share with their owners. As young kittens, they saw their mother while was grooming other kittens and themselves too as a way of bonding. It might appear as a way of cat to say ‘I love you’ to their owner. Another function of grooming is to calm them down. Many cat parents report being groomed when feeling anxious or stressed. It might be that some cats use grooming instead of purring to soothe their owners. To find out more about the question – does your cat comb your hair, the article “Why Does My Cat Groom Me?” gives us the following explanation.

“One theory is cats use allogrooming with people the same way they do with other cats,” Estep says. “It’s a friendly bonding behavior. I’ve had my own cats lick my hair.”

Make no mistake, though, cats do not think of us as other cats.

“They think of us as being friends they can have a strong relationship with,” Estep says. “They use cat-friendly behaviors to express that.”

Cats can tell the difference between cats, humans and other animals, Johnson-Bennett says, and probably choose to lick our hair because it’s the closest thing we have to fur.

Of course, it’s also possible that hair-licking could be a sign of affection for your shampoo or conditioner, which is more of a feeding behavior than a friendly behavior, Estep says. You could test the theory by using different products on your hair.

Feline experts also believe that a cat who combs the owner’s hair does that because of social reasons. In the wild, cats groom each other among their family group. According to experts, it is a way to mix their smells and create one specific smell that belongs to their family. It is a way of social belonging. There is one more reason when cats comb each other and it usually happens for territorial reasons. Some cats use grooming to show their power and impose control to a subordinate cat.

Tags: Does Your Cat Comb Your Hair?