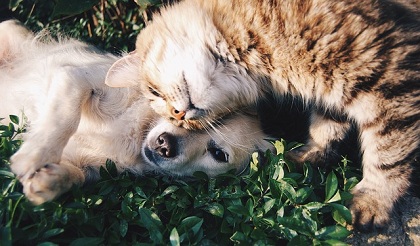 The human nose has about 5 million olfactory receptors, microscopic proteins that allow us to detect odors. With 45 million to 80 million receptors, cats have a far better sense of smell—but they can’t measure up to the average dog, whose snout holds between 149 million and 300 million receptors. The canine sense of smell may be a thousand times better than ours, and so discerning that dogs can not only track a missing person but distinguish whether he recently had a meal or smoked a cigarette. Historically, dogs relied on their superior snouts to find prey and avoid predators. These days, dogs are trained to sniff out everything from bedbug infestations to the chemical changes that indicate early-stage cancer.

Even though the dogs’ sense of smell is better than of cats, smells are the important factor in cat life. They use them to mark their territory, to warn other cats that they are not willing to share their space, or and to feel safe. They developed the so-called Flehmen response or their way to get information from smelling. It refers to their specific face when they retain air and breathe deeper to read the information correctly. This particular cat grimace brings many owners a lot of fun, but for them, it is a crucial part of being a cat. Without it, they will not be so good oriented in their world.

Tags: Who Has Better Sense of Smell - Cats or Dogs?