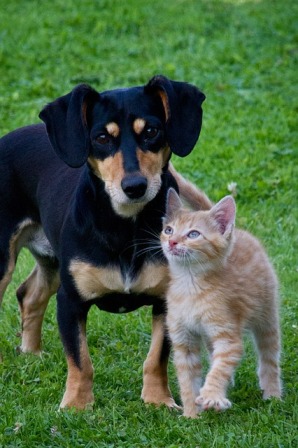 When it comes to discussion about the differences between the cat and dog lovers, we can get an impression that something beyond our choice for a cat, a dog, or both, is going on. We, as pet owners, are more or less aware of the common characteristics of personalities that go together with our pet choice. Finally, the University of Texas do a research that gives us proof that cat people and dog people have specific and distinctive personality traits. However, some natural born cat lovers can adopt a dog for many other reasons, like current circumstances, lifestyle, or available space for a pet. The similar scenario is possible in the opposite direction, too. Several dog lovers can pick a cat because of its ability to take care of its own and not be so dependent as a dog. Nevertheless, these exceptions make minority in the population of cat and dog lovers. What the study shows is that there are some specific, basic traits that portray typical cat people vs. typical dog people. Even though no one can have all the specific traits characterized for its group, every one of us can find her/himself taking its share in the commonality of the group. The article “Research Shows Personality Differences Between Cat and Dog People” gives us the results of the research.

As part of the research, 4,565 volunteers were asked whether they were dog people, cat people, neither or both. The same group was given a 44-item assessment that measured them on the so-called Big Five personality dimensions psychologists often use to study personalities.

According to the findings:

It might be that the traits, for which we love and adore our chosen pet, are the same traits we already have or want to develop in ourselves. We love them because of these similarities. If we adore the animal just because of its specific traits, we will be more able to take care of it. These particular characteristics will trigger our compassion, understanding, and deep love. Whatever animal we have chosen, it will certainly help us to build a stronger relationship not only with other animals but also with nature and other people. Cats and dogs give us their unconditional love, which in turn make us more loving, compassionate, and sociable. They help us live our humanity. By observing animals and interacting with them, we also develop a better relationship with ourselves. And, once, when we find the lost connection with our true nature again, we will be more able to give and receive in our other relationships.