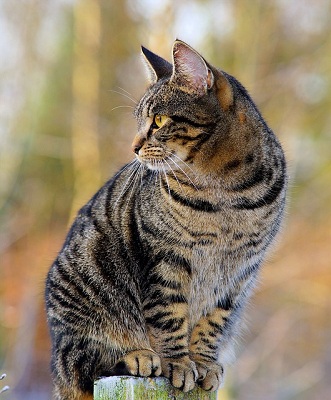 Domestic cats have evolved from African wild cats. Recent studies show they appeared more than 4000 years ago. According to some sources, they lived by people in Mesopotamia, but they domesticated in the era of ancient Egypt. Even though cats in the wild use their perfect senses, such as extraordinary sense of hearing and sight as well as great climbing skills, they followed people and settled with them. They have inherited from their wild ancestors’ tabby coat pattern with the following colors: orange and gray. The ancestors of domestic cats were solitary; they did not hang around in packs and socialize only in mating season. Today, domestic cats retain the affinity for solitary life, but they can adapt to multi-cat household, if they meet properly. Even then they prefer having their own space and territory. Feral cats form colonies, but it is not about socialization. According feline experts, this behavior has been developed for survival. They join together for food. To learn more about characteristics of domestic cats, the article “What Are the Characteristics of Domestic Cats” gives us the following insights.

Appearance
Cats in a domestic setting no longer had a need for camouflaging coats and indeed the more unusual colours and patterns would have been more prized and tended to give them a better chance of passing on their genes.An increasing number of genetic mutations gave us a variety of colours, long coats, curly coats and a great many more.

Different on the inside

Not all of the differences are external, and domestic cats have evolved a significantly longer intestinal tract.This adaptation allows them to digest a greater range of food and therefore take advantage of many things they come across in our kitchens.This means they find it easier to gain some energy from cereals but don’t expect them to happily tuck in to a bowl of muesli.

Domestic cats do not vary much by their size like dogs do. Their fur has developed in many colors and coat patterns during their evolution. It also can vary by length. There are domestic cats with short hair and those with the longer hair. Domestic cats belong to a group of cats known as Felidae or Carnivora. And, they are the smallest members of the group. Mother nature equipped them with claws, flexible spine, and ability to bristle. Adding hissing to it, domestic cats often scare bigger and stronger opponents. These characteristics remind us that domestic cats are not fully domesticated, but it is the truth many owners struggle to accept. They rather see them as soft, gentle, and affectionate pets.