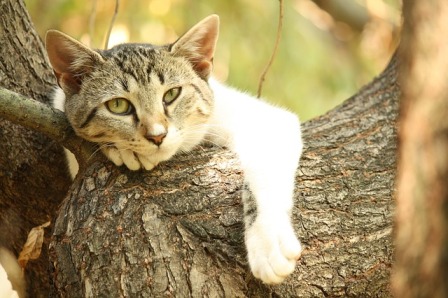 According to cat experts, neutered cats live longer and healthier than others. The non-neutered cats are exposed to many health risks and do not represent good roommates. They are simply driven by hormonal activity. Non-neutered cats will fight with other males that can lead to serious injuries, infections, complications, and even death. They roam much farther while looking for female cats. They also spray around not only their territory but also territories of other male counterparts. A huge risk for non-neutered cats that go outside regularly is feline immunodeficiency virus (FIV) and feline leukemia virus (FeLV) that can develop even in vaccinated cats. Many owners frequently think that they do not need to neuter an indoor cat. Whether the cat is indoor or outdoor, it is not decisive when it comes to neutering. The non-neutered indoor cat will be extremely frustrated and stressed about not going outside. Hormonal activity will force them to spray furniture and fight with other household cats. Or, if the indoor cat is female in heat, peaceful and harmonious life will be almost impossible. To help the cat lives longer and healthier, we need to debunk the common myths about neutering cats. The article “5 Common Spay and Neuter Myths Debunked” lists the most frequent ones.

Myth: My pet should experience the joys of parenthood before undergoing the big snip.
Truth: The good news for you is that there is no scientific evidence that it’s better to allow a pet to become a parent before spaying or neutering. Why is that good news? Because it’s a heckuva lot easier to live with a spayed female or a neutered male.

Myth: My pet’s behavior will change.
Truth: This myth can actually be true — but, typically, the changes will be for the better. Spaying and neutering can smooth out fluctuations in your pet’s behavior, making it more consistent and pleasant.

Myth: My pet will get fat.
Truth: Maybe, but whether your pet puts on the pounds is strictly up to you. The age at which pets are spayed or neutered is typically the time their growth slows and they would normally begin to put on weight anyway. The good news is that weight gain is not inevitable after spay or neuter surgery.

Myth: My pet is too young to be spayed or neutered.
Truth: In many cases, younger is better. Some young animals can reach sexual maturity as early as 4 months of age. With cats, especially, spaying or neutering sooner can prevent unwanted litters.

Myth: Spay or neuter surgery is expensive.
Truth: Not necessarily. The cost varies depending on where you live and whether your pet is a cat or a dog, small or large, young or old. The surgery is usually less expensive for smaller and younger animals.

There is one more myth that some people retain for so long. Namely, they think that neutered male cat will be less male than before a procedure. According to veterinarians and other cat owners, after surgical intervention masculinity of the male cat stays the same. The only difference is that they will be less aggressive, unwilling to enter the fight with other males, and will not spray the objects on its territory. Veterinarians think that unlike humans, cats do not have the ego and therefore, they will not suffer from the identity crisis of any sort. They will simply go on with their lives as before. If we remind ourselves that non-neutered outdoor cats live for approximately two years, the most we can do for them is to provide the best care. And one of the most beneficial ways is to demystify the common myths that prevent us from neutering the cat.