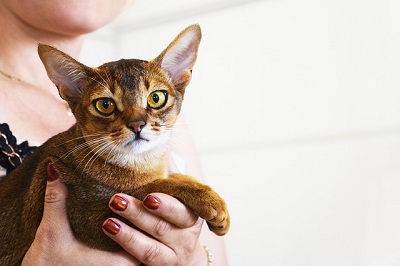 Every cat has its own personality. Some are affectionate, while others are independent. A lot of cats are somewhere in between. They can behave independently throughout the day, but become lap-cats in the evening. They like to be picked up and cuddled. They purr when we held and pet them. But, why don’t some cats like to be held? According to feline experts, a majority of cats does not like to be picked up and held all of a sudden. They prefer to be held when they want it to. Because of that, they recommend speaking in a soft voice and approach a cat gently, while observing the signs that a cat wants to be held. If we do not notice any sign, they advise us not to try. The best option is to withdraw and let a cat decide when to be picked up. To find out more about why don’t some cats like to be held, the article “6 Reasons Your Cat Does Not like to Be Held” lists the possible reasons.

1. Cats are great believers in keeping themselves to themselves.

2. Some cats spook more easily than others.

3. Not all felines have been properly socialized.

4. Your cat met up with the wrong kind of humans in another lifetime.

5. Sometimes the circumstances are unusual.

Some cats might like to be held in the past, but they have changed in the meantime. Feline experts believe that the reasons for this change of behavior might be physical. Often, cats who experience certain painful condition may refuse to be held. It should not confuse their owners. Experts think that the most important thing in this situation is to visit a vet. Sometimes, even though a cat does not feel any pain, he can refuse to be picked up. It is usually because a cat has learned to associate picking up with pain. If that is the case, we can help a cat re-learn this behavior. By using favorite treats, catnip, or some other reward for a particular cat, we might teach a cat new behavior and enable him to relax and be held again.

Tags: Why Don't Some Cats like to Be Held?