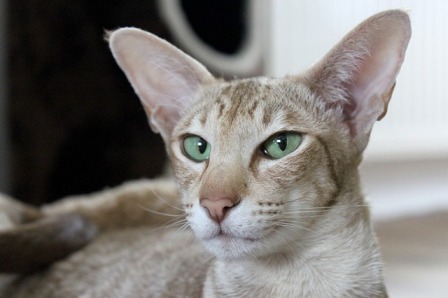 The cats are well known by their powerful sense of smell, sight and hearing. When it comes to hearing, every cat owner is aware how alert a cat becomes when hears even the slightest distant sound in our neighborhood. Sometimes, we see our cat with its ears elevated, rotating from right to left and vice versa, as registering some remote sound that we are completely unable to acknowledge. According to studies, cats are better equipped than humans and can hear sounds up to 65.000 hertz, while humans can reach only 20.000 hertz. Not only their hearing magnitude is greater than ours, but they also have an incredible ability to swivel their ears independently in different directions, which helps them to locate distant sounds unmistakably. The article “6 Cool Facts about Your Cat’s Ears” describes the most astonishing facts about cats’ ears.

1. Each ear is controlled by 32 muscles

Nearly three dozen tiny muscles rotate your cat’s ear flaps, or pinnae, to help her identify the precise direction from which a sound is coming. She can
rotate each ear up to 180 degrees to find the source of even the tiniest squeaks and rustles.

Dogs are known for their acute hearing, but cats’ hearing is actually better. Cats can distinguish sounds much higher in pitch than dogs can, and their
ability to detect low-pitched noises is almost equal. Not only that, but they can detect even tiny variances in sound — just one-tenth of a tone apart.
This allows them to easily figure out how big or small a prey animal is, and it puts humans with perfect pitch to shame.

3. The ears are critical to your cat’s balance

Deep inside your cat’s ears are three semicircular canals filled with fluid and lined with tiny hairs. The movement of the fluid over the hairs tells
your cat’s brain which way she’s moving. Another body, the vestibule, transmits information about whether she’s right-side up, upside down, lying on her
side, and so on. The semicircular canals and the vestibule are crucial to your cat’s “righting reflex,” which allows her to land on her feet (most of the
time) if she falls.

4. The ears serve as a mood barometer

We’ve all seen aggravated cats with ears lowered and turned sideways, and furious or terrified cats with their ears laid flat against their head. But the
position of her ears can indicate a whole array of emotions, ranging from happiness to curiosity to complete relaxation.

According to the Cornell Feline Health Center, only 17 to 22 percent of white cats with non-blue eyes are born deaf. However, 40 percent of cats with one
blue eye are deaf, and 65 to 85 percent of white cats with both eyes blue are deaf. The genetic mutation that creates blue eyes and white fur also causes
malformation of structures inside the ear. Blue-eyed white cats tend to have numerous abnormalities in the cochlea, the part of the ear responsible for
sending sound signals to the brain. If a cat with one blue eye is deaf in one ear, the deaf ear will always be on the side with the blue eye.

6. Gene mutations cause odd ear shapes
The flopped-down ears of the Scottish Fold and the rolled-back ears of the American Curl are caused by mutations in the genes that build the cartilage
which holds your cat’s ears erect. Although the mutation in the American Curl only affects the ear cartilage, the Scottish Fold’s mutation is also
associated with bone malformations and an increased likelihood of developing arthritis.

As we can see, the ears have a few major roles in cats’ life, performing multiple functions. This is the reason why we have to regularly check their condition by a vet. The veterinarian will carefully examine the cats’ ears in order to determine if there are any hints of inflammation or injury. If it is necessary, the vet will examine further into the ear canals or do some tests. In cases like a tumor of the ear, the vet will do a biopsy. To determine deafness in cat, detailed tests are imperative.