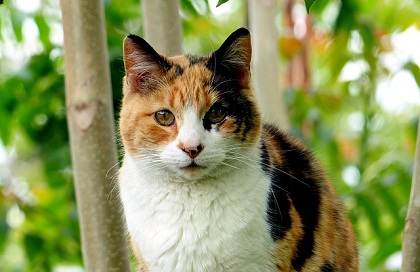 Calico cats belong to a group of so-called tricolor cats. They do not represent a breed. The term calico marks the particular group of cats that share the similar color pattern. This color pattern is very specific and should consist of three colors: red, orange or cream as the first one, black, blue, lilac, chocolate or cinnamon as the second one, and white as a third. These colors should be distributed clearly as larger shapes throughout the cat’s coat. Even though some cats can have fur in three different colors, they will not necessarily consider as calico. Many of them are usually brown or silver tabby with a huge area of white fur. Only tricolor cats with clearly shaped patches of the mentioned colors will be considered as calico cats. But, are all calico cats – females? The answer is almost yes. Namely, only 1 in 3,000 calico cats is male. The reason for this is genetics. Chromosome in cats that is responsible for their color is X chromosome. It consists of two so-called alleles or a combination of genetic codes. Thus, female cats can have an XX gene combination for coat color while males have XY. In this way, females can inherit the colors from the both of their parents because only X chromosome carries the genes of the fur color. Similarly, males can inherit only the color of one of his cat parents. To understand how genetics affects calico cats, in a simpler and easier way, the article “Are Calico Cats Always Female?” gives us the following explanation.

Since females have two X chromosomes, they are able to “display” two different colors (orange or black, depending what X was deactivated) and white; creating the 3-color calico mix.

Since males have only one X chromosome, they only have one black or orange gene and can only display orange OR black (plus or minus white, controlled by another gene).

Coat color is a complex process of dominant and non-dominate genes interacting on the X chromosomes, but that is the basis for coat color in calico cats.

In rare cases, a calico cat can be male. But, this male is rather a product of genetic mutation and is usually sterile. This cat has an anomaly on his genes. He has two X chromosomes and one Y. Because these genes also determine sexuality in cats, their combination points at a hermaphrodite cat. For that reason, breeders are not interested in male calico. However, experts advise us if we get male calico to care about – neuter him. Even though he is sterile, he is still able to mark his territory.