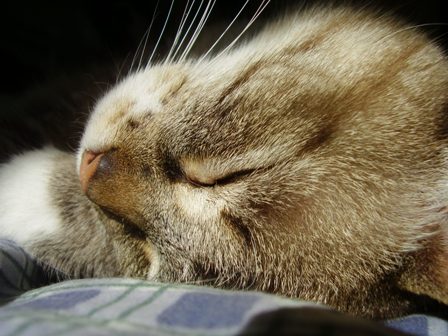 The main and the most beautiful part of being the cat’s owner is petting a cat. This pleasurable activity has always come with spontaneity, as a natural way to bond with the pet. How many times have we seen a little kid, stretching its hand and trying to cuddle the cat when encounter it? Has the kid learnt it somewhere or maybe seen that before? Whatever the psychological reason can lie behind, one thing is certain: the kid does it with spontaneity. Furthermore, when we think about cats the first thing that comes to mind is stroking the cat. We all know how this predator and hunter is tough when outside, but inside it turns into the cutest sweaty in the world. Maybe their lovable nature makes us being so attracted to them and hard to resist cuddling them. Anyway, let us explore why we are so attached to the habit of petting cats and see what the benefits to our emotional, psychological and biological health conditions are. The article “The Power of Petting” describes the way in which petting affects people’s emotions and physical health.

Alexali Brubaker, a graduate student in Psychology at San Francisco State University, is part of a project: “Psychophysiological Effects of Positive Human-Animal Interaction.” Ms. Brubaker and her colleagues are studying the effect of people petting either a cat or dog while measuring their brain waves using an EEG recorder. Their research is looking at two of the four major brain waves, alpha and theta. Past research has demonstrated that when a person has a lowered immune system or is depressed, the alpha brain waves coming from their right and left frontal lobe are unbalanced. Research has also shown that when a person has low anxiety resulting from anti-anxiety medication, their theta brain waves increase.
Ms. Brubaker and her team tested individuals’ brain waves while petting a stuffed toy and while petting a real cat or dog. People were tested while performing a stress test in the laboratory and while resting. Their results were dramatic. “When the person had the real pet, it didn’t matter whether they were in the resting condition or doing the stress test, their theta waves increased and that is consistent with relief of anxiety,” said Ms. Brubaker. The team’s results also showed that “greater alpha waves on the left side, which indicated depression and a depressed immune system, evens itself out and becomes less pronounced when you are accompanied by a real pet, either at rest or doing the stress test, which is strongly suggestive of a lessening of depression and a stronger immune system,” said Ms. Brubaker.
“We can see on the computer screen numbers we can analyze which show there is statistical significance that petting your cat lowers your stress level and improves your immune system. This is really encouraging both as a researcher and as a pet lover,” said Ms. Brubaker.

Many researchers have demonstrated that blood pressure is reduced when a person pets a cat. Dr. Cindy Wilson, Ph.D., co-editor of Companion Animals in Human Health, says that the data is building that petting cats and dogs can reduce blood pressure, and this is important because, “with anxiety, your blood pressure goes up, your heart rate gets faster and too much of it— sustained anxiety, or hypertension— over a long period of time can cause really detrimental health problems and psychological problems,” she explains. Higher blood pressure, means a higher risk of heart attack. It turns out this effect work both ways. Veterinarians Andrea Looney and Anna Glazer while at the Cornell Feline Health Center performed an experiment where they attached a tiny cuff on the leg of a cat to take its blood pressure. After just five minutes of petting, the cat’s blood pressure dropped 25 points. It turns out petting your cat is heart healthy for both of you.

One scientist has now taken this research to a new and exciting level. Dr. Johannes Odendaal, Research Professor of the Life Sciences Research Institute, and author of Pets and Our Mental Health, along with his colleagues conducted experiments taking blood from humans and dogs, both while the person petted the dog and before. They measured the change in several neurochemcials found in the brain including; Dopamine, Oxytocin, Prolactin, Beta-endorphin, and Norepinehrine all of which directly influence such feelings and emotions of exhilaration, positive excitement, pleasurable experiences, social bonding, sense of well-being and contentment, and feelings of comfort and security. In addition, they measured another chemical, Cortisol, which increases during stress and can have a negative effect upon the immune system, leaving the body open the illnesses.

As we can see in this article, it is very difficult to continue feeling negative emotions, such as anger, sadness, or loneliness when we pet our cats. The connection they provide can improve our moods significantly, help us relax and make us feel good. Who can be sad, angry or anxious when look at the little kitty snuggling and purring in our lap? If we come home from a very stressful day at the office, everything that we can do is to allow the cats to lift our spirits and enjoy this simple activity of stroking the cats.

Tags: How Petting Cats Can Lift Our Spirits