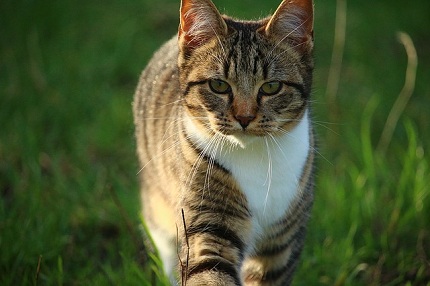 Spraying in cats is a part of their life. They spray for a territorial, sexual and social reason. According to feline experts, spraying in cats is a way of communication. They use spraying to mark their territory; they spray when in heat, and to establish their confidence. However, after neutering, cats usually stop spraying. It is because this natural behavior is initiated by hormonal status. Cats tend to begin to mark their territory when they are about 6 months old. If we wait too long with neutering, cats who have accustomed to spraying will continue with this habit afterwards. For other cats, the need to spray vanish after neutering, but returns after certain situation. Namely, cats can react in this way when they are under the stress. They try to communicate that something is wrong. Sometimes, it can be the arrival of a new baby, new pet, or a new partner. For some cats, the appearance of a stray cat in the yard can be a source of stress. Indoor cats, especially males, can react by spraying the walls near the windows, where he has noticed another cat. To better understand the cat’s need for spraying and get an idea what to do when neutered cat is still spraying, the article “Spray Wars” gives us some useful explanations.

Reducing your cat’s stress is an important key to modifying his spraying behavior. Spend some time observing and documenting his activities. Is there any consistency to when and where he sprays? These are important clues to the stressors that are causing him to spray. Is it always in the late afternoon by the window overlooking the back yard? Perhaps that’s when Rocky, the neighbor’s macho intact male Siamese is making his rounds. Ways to reduce the impact of this stressor could include talking to your neighbor about neutering Rocky (perhaps even offering to pay for the surgery, or helping to direct Rocky’s senior citizen owner to a low-cost clinic and driving her there yourself); giving the neighbor convincing educational materials on why it’s healthier for Rocky to live indoors; closing the blinds of the offended window or putting your cat in another room for a while in the afternoon so he can’t see Rocky when he strolls through; or, if Rocky’s owner is unapproachable, unresponsive, irresponsible or perhaps even nonexistent, collecting Rocky and taking him to your local animal shelter. You may have to resolve the guilt you feel about sending him to probable euthanasia, but your guilt should be offset by the vast improvement in your own cat’s quality of life, and the knowledge that Rocky won’t be out roaming around producing litters of baby kittens for whom there are not enough homes, or getting sick and dying a slow death from a deadly cat disease such as feline leukemia, feline aids, or feline infectious peritonitis.

However, according to medical experts, we should make a difference between cat spraying and cat so-called indiscriminate urination. As we have seen, spraying in neutered cats is mainly a sign of stress mainly, and the causes are numerous. When we found the cause, we would help a cat to get rid of this habit. On the other hand, indiscriminate urination happens when a cat urinates out of the litter box. Frequently, a reason for this unpleasant situation can be a dirty litter box, a new scented litter, or inappropriate placement of the litter box from a cat’s perspective. In both cases, we can do our best if we try to understand what is beneath the bad behavior, not yelling or punishing a cat, and elimination of the cause as soon as possible.

Tags: What to Do When Neutered Cat Is Still Spraying?