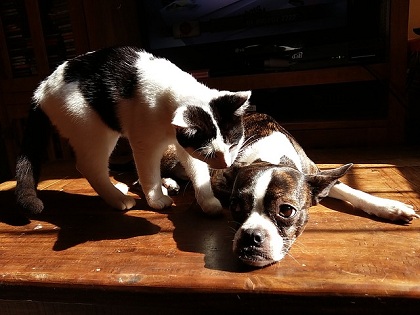 Feline language represents a great mystery for every cat owner. Even though we learn a lot from our daily experience with these amazing animals and can communicate easily with them, sometimes we wonder about specific ways of their communication. Cats use nose bumps often, not only when they meet another cat, but also when to relate to humans. They nudge their noses with familiar cats as well. According to feline experts, this nose bumping is a sign of affection as well as a way to greet another cat. They use nose bump when they see a new cat, after sleep to say ‘good morning’ to another cat or their cat parents, when to meet another housemate-cat after being apart for a few hours from each other, etc. Moreover, experts found out that head-butt or bunting is a stronger sign of their affection than nose bumping. They see something territorial in nudging their noses against ours, but in bunting, they see a clear sign of affection for their owners. Experts also speculate that nose bumping has its root in their kittenhood. Namely, little kittens use their sense of smell to find the milk and the warmth of their mother. This sense helps them survive. There is no wonder that their sense of smell is more advanced than humans’. They get much information from their olfactory sense. In this way, they learn about the world, cats, other animals, and humans. To find out more about nose bump and whether it is a sign of affection or just a greeting, the article “Cats Touching Noses” gives us the following comment.

What dictates whether cats touch noses as a greeting behavior does not depend on the gender of the cat but on the degree of friendship two cats have for each other.

When a cat greets his human companion he might first touch the person very gently with his nose and then exchange scent by rubbing against the person.

Some “affiliative body postures”² may be specific to the cat/human relationship. These may have evolved over the course of thousands of years of domestication. Also adult cats behave as kittens towards us because we tend to keep them in perpetual kittenhood.

However, nose bumping is not for everyone. Cats do not nudge many people with their noses, especially not strangers. They share this cute behavior for their closest family members. Therefore, we should accept a nose bump as a special honor and with appreciation. That is the way of cats to show us their affection, and we are the lucky ones.

Tags: Nose Bumps - Sign of Affection or Just a Greeting?