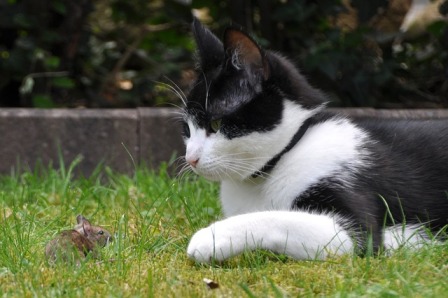 As all cat owners know very well, cats are natural born hunters. Their hunting skills have been highly developed through the years of evolution, which are deeply ingrained in their behavior, and represent their basic instinct. And we accept all of these in theory, but when it comes to practice, we can find ourselves screaming or yelling at the cat when brings us a killed bird, mouse, or even a rat. These reactions, no matter how natural they seem to us, can be very confusing for cat. Cats consider us as a part of their family and bringing the prey home is simply an act of giving and providing its family with food. Sometimes, cats just want to show us how outstanding their hunting skills are. They expect us to reward their effort and acknowledge their hunting competences. However, our screaming or yelling will frustrate them. Because of that, it will be a good idea to calm ourselves, praise the cat, and remove the prey at the front doorstep or wherever it is acceptable. The article “Why Do Cats Catch Mice?” describes some others accompanying habits that surround their hunting activities.

Why does a cat play with her prey?

The assumption that a cat cruelly toys with her prey before killing it is a common misconception. To the horrified human who watches a cat killing a mouse, there does appear to be a lot of shoving, pouncing and poking involved; but appearances are deceptive. From the cat’s point of view this is basic self-defence. Most animals are not harmless. Take rats and mice for example. They are desperate, and very fast and their sharp teeth can deliver a nasty bite. (You are about twenty times bigger. Fancy going face-to-face with a rat?) And don’t underestimate the damage a bird’s beak can do. These are after all, animals with nothing to lose.
Cats kill their prey by biting through the neck to sever the spinal cord. But they need to do so safely with their short muzzles. For this to work well, the prey has to be pretty much motionless. So what appears to us to be cruel sport is, from a cat’s point of view, the common-sense technique of exhausting the prey before the deadly bite. Her instincts tell the cat this is the best way to finish the job effectively with minimum risk. If she tries to rush the job, the prey is likely to escape, and she might end up injured.

Why is my cat bringing live mice inside the house?

There are two main reasons why a cat will do this. We have already seen that from a cat’s point of view her humans are adopted members of her community who lack essential hunting skills. So the mouse might be presented to you as a public-spirited training exercise. Your best move is to trap it as quickly as possible, and once out of the cat’s approving gaze discreetly dispose of the unfortunate beast as quickly and humanely as possible.
Secondly, when your cat shares a garden with other cats (and no, from the cat’s perspective, it’s not your garden) the cat may feel insecure after catching something. She needs to protect her prize from passing cats or other animals which may try to steal the prey from her. So she grabs her victim and and heads for the safety of indoors where she has the ‘home advantage’. When she releases the prey in territory which is intimately familiar to her but strange to the prey the advantage is all on her side.

Why does a strange cat leave dead animals at my front door?

Sadly many domestic cats find themselves homeless for one reason or another. Most commonly this happens when the owners move and leave their cats behind. The abandoned cats will start looking for a new home to adopt. By bringing you its catch, the cat – in her eyes – is bringing a gift to test the waters. After all, if you move to a new home and the neighbours bring a plate of freshly baked cookies to welcome you to the neighbourhood, you are hardly going to reject them. In the same way, the cat hopes that its gift will break the ice and make her welcome around you.
Bear in mind that until very recently, a cat which demonstrated itself to be a good mouser or ratter was quite likely to get the welcome it was looking for. It’s hardly the fault of the cat that human attitudes have changed in one short generation and her instincts have not yet caught up.

If we perceive the prey as a gift of love from our cat, as Arden Moor suggests in his The Cat Behavior Answer Book (Storey, 2007), it will be much easier for us to accept the cat’s natural instinct of hunting, instead of ignoring it and labeling as something bad or as pure killing instinct. Apart from showing their affection for us, many cats, especially females see us as a creature with no hunting skills and will continue to bring live preys in order to teach us to hunt. One of the roles of mother cat is to teach their young how to catch the prey. In case our female cat has not her own kittens, it can treat us as kittens and apply her teaching skills. Whatever the reason for bringing the prey home could be, our role is to accept it and be grateful for cat’s affection and its effort.

Tags: Why Do Cats Bring You Their Prey?