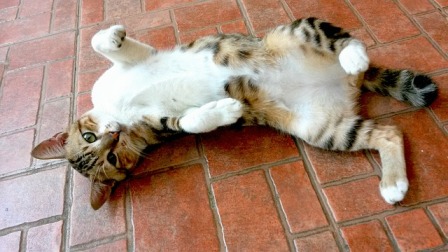 No matter how well we think that we know out cute cat, there is always some mysterious behavior that can make us confused. One of these behaviors is when the cat rolls around its back. The cat stretches its paws, opens up its belly, while is rolling on the ground. Many of us consider it as a call for cuddling and easily fall in the trap of trying to rub the cat’s belly, being taken aback by its reaction. Actually, they do not like to be touched. Why is that so? A single reason for that sort of cat’s behavior cannot explain its weirdness. Many people consider it as a sign of joy and affection, while others regard that as an invitation to play. According to new research, cats like dogs show their submissiveness toward the owners. But, every cat owner knows that there is no such a thing as owning the cat. The following article entitled

Cat rolling in the dirt:

Have you noticed the moment your cat goes outside on a warm day, he races over to the nearest patch of dry dirt and rolls around in it? To be honest, I don’t have the answer to this one yet. But my hunch is that it feels nice and because they can. They’ve been inside the house, probably napping as that’s what cats do best. They decide to go outside, find a nice dry/dusty patch, roll and stretch out. The dry dirt must provide a nice sensation on the skin, like a mini massage, they get to stretch their muscles and take/on some outdoor scents.

A female cat in heat will often roll on the floor in front of humans and other cats. At this point in time the female is full of sexual hormones, and extremely affectionate. Rolling is her way of letting male cats in the area know that she is receptive to mating. After mating a female cat will also roll on the ground and lick herself.

Has your cat been on the catnip again? Rolling is a common side effect of catnip ingestion. For those not up to speed, catnip is a herb which induces a high in cats. The active ingredient is nepetalactone. It is completely harmless to cats and the effects wear off within a few minutes.

Rolling at your feet:

Have you noticed that this kind of behaviour always seems to occur when you’re busy doing something else? This is a sign that your kitty wants you to drop everything you are doing and give him a pat. It displays a sense of trust and playfulness. Just be careful, some cats will roll on the floor and wait for a rub on the belly and then dig their claws into your hand.

Many people encounter the cat’s rolling around on its back when they come home after their daily work or after being absent for a few hours or longer. The most widespread belief among cat owners is when the cat displays this type of behavior in front of them; it represents some kind of greeting. It is the cat’s way to tell us: “Hi! I am happy to see you again! I have missed you!” However, experience has taught us a lesson of not to tub its belly at this very moment. Maybe this rolling position uncovers the cat’s most vulnerable body part, which brings to the surface the issue of trust. It is not about the cat does not trust the owner, but rather it is not the right moment to the intimate act of rubbing the belly. For this sort of reward for our trustfulness, we have to wait for a better moment.

Tags: Why Do Cats Roll around on Their Backs?