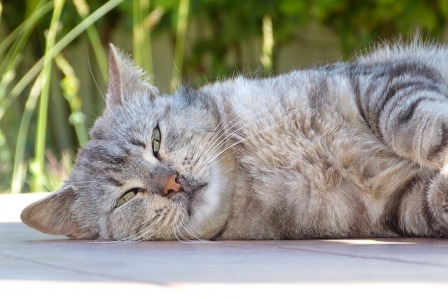 Cats are independent creatures that can take care about themselves. If the cat is blessed with a good health, this trait makes it the most undemanding pet. However, with the aging, the cat is going through different processes, which need the owner’s help. The cat is considered senior between 10 and 12 years, depending on the breed, habits, diets and genetics. Aging is a natural process that includes many bodily and behavioral changes, causing the cat a lot of stress. Although many changes are completely normal and expected like longer sleep, reducing activity, thinner fur and faster fatigue, other can warn us that some medical issue lies behind. The article “The Special Needs of the Senior Cat” addresses the common alternation in cats’ health and behavior.

• Compared to younger cats, the immune system of older cats is less able to fend off foreign invaders. Chronic diseases often associated with aging can
impair immune function even further.

• Dehydration, a consequence of many diseases common to older cats, further diminishes blood circulation and immunity.

• The skin of an older cat is thinner and less elastic, has reduced blood circulation, and is more prone to infection.

• The claws of aging felines are often overgrown, thick, and brittle.

• In humans, aging changes in the brain contribute to a loss of memory and alterations in personality commonly referred to as senility. Similar symptoms are
seen in elderly cats: wandering, excessive meowing, apparent disorientation, and avoidance of social interaction.

• For various reasons, hearing loss is common in cats of advanced age.

• Aging is also accompanied by many changes in the eyes. A slight haziness of the lens and a lacy appearance to the iris (the colored part of the eye) are
both common age-related changes, but neither seems to decrease a cat’s vision to any appreciable extent. However, several diseases-especially those
associated with high blood pressure-can seriously and irreversibly impair a cat’s ability to see.

• Dental disease is extremely common in older cats and can hinder eating and cause significant pain.

• Although many different diseases can cause a loss of appetite, in healthy senior cats, a decreased sense of smell may be partially responsible for a loss
of interest in eating. However, the discomfort associated with dental disease is a more likely cause of reluctance to eat.

• Feline kidneys undergo a number of age-related changes that may ultimately lead to impaired function; kidney failure is a common disease in older cats,
and its symptoms are extremely varied.

• Degenerative joint disease, or arthritis, is common in older cats. Although most arthritic cats don’t become overtly lame, they may have difficulty
gaining access to litter boxes and food and water dishes, particularly if they have to jump or climb stairs to get to them.

• Hyperthyroidism (often resulting in overactivity); hypertension (high blood pressure, usually a result of either kidney failure or hyperthyroidism),
diabetes mellitus; inflammatory bowel disease; and cancer are all examples of conditions that, though sometimes seen in younger cats, become more
prevalent in cats as they age.

If we want the longer and healthier life for our cat, we have to undertake some steps in order to make the cat’s aging process much easier. We have to ensure a proper diet, especially if our cat is prone to obesity. Furthermore, it is up to us to provide easy access to the cat’s favorite perching locations, help the cat to exercise, groom its fur more and more carefully, etc. Above all, we have to monitor the cat’s behavior cautiously and look for any indication that can point at any medical issue, that can go unnoticed. Whatever seems strange and odd for our cat, or greatly varies from its regular behavior, it is worth noticing. Through this process of aging, our love for the cat has been put to the test, and patience is the right answer. All the difficulties we and our cat go through together will be smoother and simpler with patience.