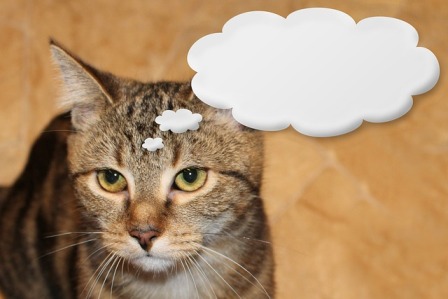 During evolution, many animals went through the process of domestication, except cats that are the only animal species which is not thoroughly domesticated. It has been considered that the main reason for this incomplete process is the lack of their useful role in human’s community. Every domestic animal was assigned specific roles, while cats stay independent, completely on their own, continuing their hunt as they do in a wild. Nevertheless, their coexistence with humans help the cat to develop some social skills, which are necessary for their survival close to people. Who of us has ever wondered how the cat, living with humans for ages, experiences human beings? Does the cat perceive itself as a cat or as a part of the human race? Or, how the cat sees a man? Does the cat think that humans are different species, comparing to cats or special exemplar of cats? The article “Your Cat Probably Thinks You’re A Cat Too, Says Scientist” suggests that the cats perceive humans as the members of their own species.

Your cat probably thinks that you are a cat yourself — albeit a much larger one.
That’s according to British biologist John Bradshaw, who says the way furry felines greet us (with their tails up) and rub on our legs is similar to how the animals communicate affection to other cats.

“In cat society, this sequence is usually performed by a smaller cat towards a larger one — a kitten or young cat towards its mother or an older relative, a female towards a male,” Bradshaw, who is foundation director of the Anthrozoology Institute at the University of Bristol, told The Huffington Post via email this week.

“[I]t seems to be a way that smaller cats have of indicating to larger ones that they want to remain friends. When cats started becoming friendly towards us, maybe 5,000 to 10,000 years ago, they just adapted this piece of behavior to show that they like us, too,” he continued.
Author of the 2013 book Cat Sense: How the New Feline Science Can Make You a Better Friend to Your Pet (which has been attracting a resurgence of interest on social media this week), Bradshaw has been studying the history and behavior of cats for decades. He argues that to live happily with our cats, we must first come to understand their behavior and their eccentricities.

For instance, knowing that cats carry out this tail-up/rub ritual as a form of friendly greeting should influence the way cat owners interact with their pets, Bradshaw says.

“Research has shown that when people interact with their cats, the interactions tend to go on for longer if they’re started by the cat — many cats seem to need to go through the tail-up/rub ritual in order to feel comfortable, and may not have time to do it if it’s the person who makes the first move. So the advice would be, take your time when approaching your cat, and wait for it to at least put its tail up before making actual contact,” he told HuffPost.

In the course of cohabitation, there are many things that could be learnt. And during the years of joint life between the cat and the man, the man had a chance to learn much from the cat, for example: how to be relaxed and calm, how to enjoy life and how to be curious. From the other hand, the cat learnt from the man special speech and vocalisation, as well as a tendency for comfort. Man and cat community is a wonderful example how two different species can live together in love and harmony. And not only that the cat sees the man as the member of its tribe, but there are also many cat’s owners who considered the cat as a member of his own family. Whatever we or cat perceive each other, the one thing is important – this is love that does not care for differences.

Tags: Do Cats Think They Are Humans?