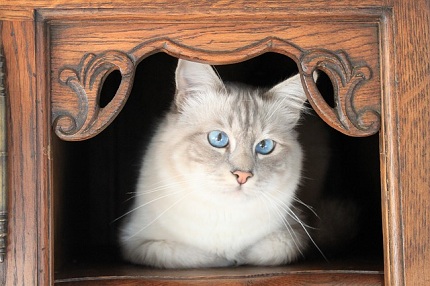 The Birman cats are sweet, relaxed and easy going cats. They resemble Siamese cats, but have a few opposite basic traits. Unlike Siamese cats, they possess soft voices, they are cuddly and docile and like large families with many children and other pets. These cats are medium sized with a silky coat that comes in two layers. Because of its texture and lack of undercoat, fur of the Birman cats are easy to maintain. Grooming by comb once a week is perfect for their fur. Regular brushing will help their coat to shine and express their unique beauty. These cats, like Siamese, belong to color point cats that have areas on their bodies in different color. Namely, their faces, legs, and tails are of a darker color than the rest of their coat. What makes the Birman cats unique and special are their paws. They are white and look like as wearing gloves. History of the Birman cats is not known. Today, we only know that these cats were companion cats of Birman priests and a pair of Birman cats left Burma as a gift of priests that showed their gratitude. In 1919, only one of the cats survived – female, who was already pregnant – and settled in France. Even though we do not know much about the history of Birman cats, many myths surround these adorable cats. The article “The Legend of the Birman Cat” tells us the most interesting story about them.

Centuries ago the Khmer people of Asia built beautiful temples of worship to pay homage to their gods. One such temple built many centuries ago was the temple called Lao-Tsun built in honor of Tsu-Kyan-Kse their beautiful goddess. One night the temple was raided by bandits, and in trying to protect the golden statue of their goddess, the High Priest Mun-Ha suffered a heart attack.

As his master lay dying the priests white cat, Sinh sprung to his aid and hissed in defiance at the intruders, the junior priests seeing this were heartened and managed to repel the bandits. Sinh relaxed and gazed up at the statue, as he did the perfect soul of his master suffered the miracle of transmutation and passed into the body of the cat. As the transfer took place, the cat´s body changed to reflect the pale gold of the statue of Tsu-Kyan-Kse, his face legs and tail became the color of the earth and his yellow eyes turned a brilliant sapphire blue. Only his four white feet still resting on his masters body remained unchanged signifying his masters purity.

According to feline experts, this breed is pretty healthy, but they suggest keeping them as indoor cats. Because of their laid-back nature, they can easily become a victim of a larger dog or coyote. The biggest risk to their health is a propensity to gain weight. Namely, many Birman cats suffer from obesity, especially if they lack activity. Because of that and their social nature, the best atmosphere for their healthy growth and long life is a home with a lot of children and many pets. Such an environment is the most nurturing for these sweet and cuddly cats.