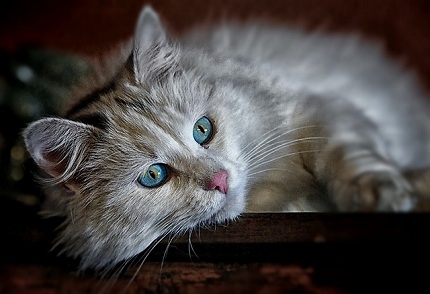 Cats generally are not prone to cowpox. However, they can get cowpox occasionally. It is especially true if a cat is an active and passionate hunter because feline experts consider rats as the transmitters of disease. Rats do not suffer from cowpox, but they are known as the hosts for this type of viral infection. Cowpox is not widespread infection for cats. Cats in American continent are saved from this disease. Namely, there are sporadic cases of cowpox in cats in Canada only. The majority of cowpox infections are usually seen in cats in Europe, especially in Scandinavian countries, Germany, France, Austria, UK and in the post-Soviet states. Infected cats often show no signs of cowpox in the beginning. After a rodent bite that usually appear at cat’s head, neck or leg, a cat looks like healthy, because an incubation period lasts approximately ten days. After this period, many owners notice a nodal papulae on the cat’s skin. It can be followed by some other symptoms, such as itching or high temperature. Some cats become lethargic, silent and distant. To find more about the signs of cowpox in cats, the article “Cowpox” lists the most common ones.

• Many infected cats may not show any signs.

• Conjunctivitis occurs in some cats

• Mouth ulcers and vesicles occur in some cats

• Usual site of the skin lesions initially is the head, neck and foreleg, but generalised secondary nodules, ulcers and scabs form over a 4-5 day period
and dry leaving bald patches which may or may not regrow hair.

Even though cats rarely transmit cowpox to humans, it is wise to be alert and not allow children or older people to handle the ill cat. Cat experts also recommend removing a contagious cat from other animals. In mild cases, the illness goes away after eight weeks. However, when cowpox gets serious, the cat should be treated with antibiotics or some other medicine prescribed by a vet. Experts warn us to be careful about the use of corticosteroids because it showed as fatal for some cats. The groups of cats that are particularly vulnerable to corticosteroids are the cats diagnosed with feline leukemia virus (FeLV) and feline immunodeficiency virus (FIV).

Tags: Can Cats Get Cowpox?