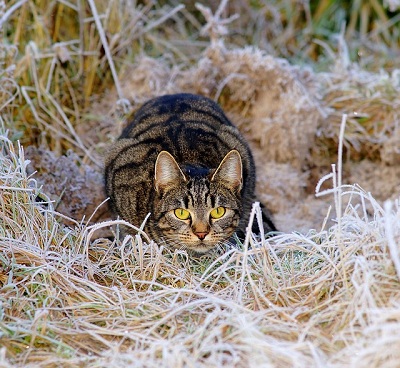 According to a recent research, cats live with humans more than 9,000 years. In spite of that, they still hunt. Normally, stray cats and cats who live in a wild hunt to survive. But, domestic cats who have the regular meals hunt even though they do not need to. They still retain their hunting skills. Even though they do not need to hunt for their meals, the outdoor cats bring home four preys weekly, according to feline experts. They rather play with them than eat them, but still, kill them. Scientists have also recently found out that cats have excellent hunting skills, similar to the greatest predators in the wild, such as tigers, leopards, and other wild cats. Some of them go even further, claiming that their skills are better than tigers’. Namely, they found out that cats who live on farms roam huge areas. They fight with other cats and defend their territory, every day. They can kill a mouse for just a few seconds. It might be that cats on farms had to polish their hunting skills to survive. In the past, many farmers kept cats on farms just because of their excellent hunting skills. Cats were very useful. They help farmers keep rodents and mice at bay. Thus, it is not surprising that they still show extraordinary hunting skills. To find out more about cat hunting skills, the article “Cats Are Better Hunters Than TIGERS” gives us an interesting observation.

Experts at the Royal Veterinary College placed sensors on a cat’s joints and analysed the pressure exerted by its paws with a special floor pad, to reveal that cats rarely straighten their legs when prowling.
They are almost always in a crouched posture, even when they run at full speed.
Professor John Huntington explained that this position is why the cats are so agile and stealthy.
He said domestic cats’ posture is ‘almost indistinguishable’ from that of a big cat.
Domestic cats can jump almost five times their height and are incredibly flexible. This action has recently been captured on X-ray.
It shows the fluid way the skeleton moves to give cats the perfect poise.
Pound for pound, domestic cats are just as powerful as big cats – if not more so – and thanks to their flexibility they are in some ways better athletes, he said.
Domestic cats have retained their hunting instinct, even though most don’t have a need to hunt because they are fed at regular intervals by their owners.

Many people still wonder why cats still hunt even though many of them do not need to. The common explanation is the very reason they began their cohabitation with humans. If they were not good hunters, they will not become a part of our life. And still today, cat hunting skills amaze us, almost as their extraordinary senses.