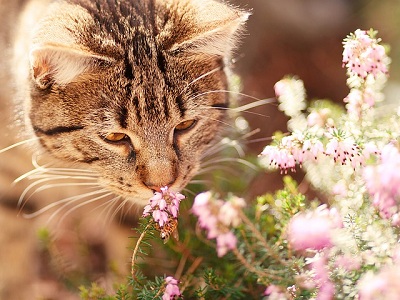 Homeopathy is a method of healing that many veterinarians do recommend when treating various conditions in cats. They have found it very effective not only with acute problems in cats but also with a healing of chronic conditions. According to them, the principle is the same as with humans – “like cures like.” Namely, homeopathy experts use herbs that provoke the symptoms in a healthy person to heal the condition that has a similar manifestation in a sick person. This principle is opposite to the conventional system of Western medicine. While Western medicine treats symptoms, homeopathy tries to heal a certain illness. According to homeopathy practitioners, symptoms are the way of our body to heal itself. Because of that, they do not try to suppress symptoms. They rather encourage and stimulate our immune system to heal an illness. Unlike Western medicine, homeopathy considers our organism not only on its physical level, but rather as a wholeness of our psychological, emotional and physical condition. In order to heal an illness, homeopathy needs to treat all levels of our existence. The similar applies to cats. Veterinarians who use homeopathy in their practice claim they get very good results with the following chronic conditions: kidney disease, arthritis, skin problems, high blood pressure, etc. They have also found it useful in treating behavioral problems such as fears, aggression, anxiety, and so on. To learn more about cats and homeopathy, the article “Homeopathic Medicine for Healthy Cats and Dogs” lists several types of homeopathic remedies and their usage.

Arnica: The most important first aid remedy for ALL injuries – use first for all sudden intense pain complaints.

Rhus-Tox: Symptoms – Worse for initial movement, better after continued motion. Restless.
Symphytum: Helps heal fracture. Only give after bone has been properly set.

However, experts warn us that symptoms usually worsen after the beginning of treatment and it is the natural part of healing. They also suggest that disease should not exacerbate too much. If the symptoms persist longer and with a serious intensity, then it is the clearest sign that the wrong homeopathic remedy is chosen for a cat.