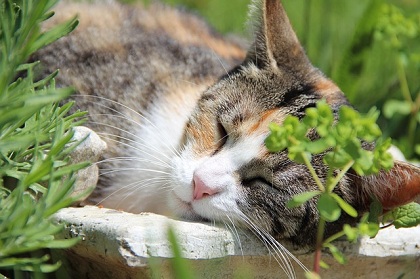 Almost two third of cats like catnip. According to feline experts, these cats carry a genetic predisposition to recognize and react to catnip. Namely, experts claim that the cats who are not affected by catnip are usually the ones that do not belong to breeds from areas where catmint was cultivated in the past. Their ancestors were not exposed to the plant, and consequently, they do not develop certain genes that can react to it. The cats, who react to catnip, become highly exciting when smell toys, sprayed with the extract of this interesting plant. They roll over, jump, run, and become playful like kittens. However, roughly 30 percent of cats do not respond to a catnip smell. According to feline experts, they simply lack genes that are responsible for responding to the plant. They have discovered that cats who are indifferent to catmint are sensitive to honeysuckle. Those cats have the same reactions as other cats to catnip. Experts warn us that there are many sorts of honeysuckle. Some claim that among 68 types of honeysuckle, only one attracts cats. Its Latin name is Lonicera tartarica and is completely harmless to cats. This type of honeysuckle contains the chemical that resembles nepetalactone, the chemical found in catnip. For that reason, a reaction of cats who smell catnip are similar to those who act sensitively to honeysuckle. To learn more about cats and honeysuckle, the article “Honeysuckle: When Catnip Doesn’t Create a Crazy Cat” gives us detailed description.

Honeysuckle is a plant that grows in hundreds of varieties around the world. It comes in vines, bushes, and trees. The type that we’re interested in when we’re talking about cats is Lonicera tartarica or Tartarian honeysuckle. This plant is a deciduous, woody shrub that can grow up to 15 feet tall.

Honeysuckle berries and possibly flowers and leaves are toxic to cats and should not be given to them. The woody part of the plant is what is made into toys and sprays for cats. In fact, because the wood can result in choking or damage to a cat’s mouth, it should only be given to our feline friends when it is contained within a tough toy.

Even though there are cats who react to both plants – honeysuckle and catnip, there are cats, usually the ones who are indifferent to catnip, who like Valerian. Valerian is a plant who finds its use in assisting people to sleep better and be less anxious. For some reason, some cats are its greatest fans. Whatever plant attracts our furry friends, experts suggest their use to twice a week. All these plants, if supplied from trustworthy vendors, will not cause side effects nor an allergy.