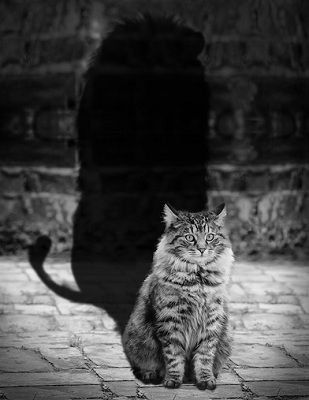 Cats who show aggressive behavior rarely do it out of the blue. They become aggressive for a reason. Many reasons can cause aggression in cats. Some cats act with aggression when backed into a corner. According to feline experts, cats tend to stay away from conflict and will do everything to avoid it. They scratch, claw, spray, roll over and rub their faces against various objects, trying to mark their territory and send a clear message to intruder cat. A problem happens when a cat has no chance to warn another cat about her territory or when a new cat comes into a household. In the first case, an indoor cat can spot the intruder cat in the yard, but does not have a chance to act accordingly. Experts believe that these cats usually redirect their aggression toward another cat in the household or to humans. Many owners often wonder why cats suddenly change their behavior, not knowing what is going on outside. To stop this type aggression, experts suggest distracting a cat with a new view without the intruder or cover the lower surface of the windows with cardboard or some other opaque material. The goal is to prevent a cat from seeing a trespasser in the yard. In another case, there is a possibility that a new cat is not properly introduced. A good way to make things work better is to reintroduce them. Another option is to separate their territory, leaving no space for their encounter. To find out more about what causes aggression in cats, the article “Aggression in Cats” give us the following tips.

However, the most important thing when a cat shows aggression is to pay attention to a possible underlying medical cause. Namely, many cats become aggressive when in pain. The problem can escalate when we unintentionally touch a sensitive area. For that reason, we can reflect on other causes of aggression in cats, after we have excluded a possible disease first.

Tags: What Causes Aggression in Cats?