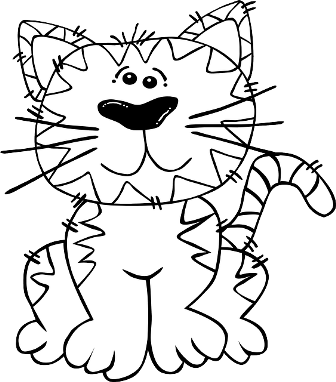 Cats are among the first animals every child has learnt to draw. We all know how it goes: head, tummy, paws, tail, eyes, ears and the whiskers, of course. The whiskers are the cat’s trademark. However, they are more than trademark – they contain different functions, all pretty necessary for life and development of this precious being. It has long been known that whiskers serve the cat in its handling and orientation in space. But, many of us do not know that cats also have whiskers on their jaw and on the front legs. Not only they help together the cat to measure distances between the objects, but also show the cat’s mood. The article “13 Things You Didn’t Know about Cat Whiskers” lists the most important facts about them.

1. The word “whisker” dates to around 1600 and was originally a playful formation from the Middle English word “whisker” meaning anything that whisks or
sweeps. Your cat’s whiskers are like little brooms!

2. Also called “vibrissae” or tactile hairs, whiskers are two to three times thicker than regular cat hair and are found not only on either side of the
muzzle (those ones are called mystacial whiskers), but on the jaw, above the eyes and on the back of the forelegs as well.

3. There are usually about 12 mystacial whiskers on each side of the muzzle (although some cat have more); these are the longest of the facial vibrissae.

4. Unlike human hair, whiskers are deeply embedded and connected to the nervous system. The whisker tips are equipped with sensory organs called
proprioceptors that help the cat, determine an object’s distance, direction and even surface texture. (Could this be the source of a cat’s magical super
powers?)

5. If a cat is required to use a narrow food or water bowl, the pressure to its sensitive parts can cause what is known as “whisker stress.” (Yes, that’s a
thing.) If your cat scoops food out with a paw or knocks food on the floor to eat, consider using a wider bowl.

6. A cat’s whiskers correspond to the width of its body; it uses them to know whether or not it can fit through narrow spaces – in general, the chubbier a
cat, the wider its whiskers. (It occurs to us this would be a helpful automobile feature for city driving.)

7. The whiskers on the back of the front legs help a cat in climbing and importantly, they help when the cat is in contact with prey; they act as another
set of eyes when determining where to deliver the fatal bite. (Sorry, birds and mice.)

8. Mystacial whiskers are connected to muscles that allow the cat to move them.

9. Whiskers often indicate mood. Pulled back against the cheeks can mean kitty is scared or angry; relaxed whiskers mean a relaxed and happy cat. Whiskers
pointed out front and tense generally mean the cat is feeling aggressive or is in hunting mode; the cat may also be curious if it is taking a reading of
the environment.

10. Some breeds, like the Cornish Rex and Devon Rex (a delightfully alien-looking cat described by the The Cat Fancier’s Association as a madcap mix of a
“cat, a dog, a monkey, and Dennis the Menace”) have short, curly whiskers.

11. A Maine coon cat that lives in Finland named Fullmoon’s Miss American Pie (AKA “Missi”) holds the record for longest whiskers in the world; in 2005,
Guinness World Records measured them at a whopping 7.5 inches long!

12. Thankfully, Missi’s whiskers have evaded trimming – cutting a cat’s whiskers should never, ever be done. It would be like taking away a human’s vision
or sense of touch. (And who in the world would ever want to cut those adorable things anyway?)

13. Whiskers do shed, however, but don’t worry. They grow back on their own, allowing the natural cycle of accomplishment and cuteness to continue.

Additionally, the article “What Happens if a Cat’s Whiskers Are Damaged or Clipped” gives us some interesting bonus facts about cat’s whiskers:

• Interestingly, there is also some evidence to suggest that whiskers aid somehow in helping cats detecting odors.
• Like human fingerprints, every cat’s whisker pattern is unique.
• In addition to the obvious whiskers in horizontal rows of the ‘whisker pad’ of their cheeks, there are also whiskers between the corner of a cat’s mouth
and the outer corner of the nose, on the chin, and the eyebrows, and on the back of the front legs.
• The scientific name for a cat’s whiskers is ‘vibrissae’ which hints at their sensitivity to vibrations in air currents.
• The breed of cat called the ‘Sphinx’ often has little to no whiskers.
• As you might have guessed, blind cats rely almost solely on their whiskers to navigate.
• When a cat is angry or defensive, the whiskers will be pulled back. When the cat is happy, curious or content, the whiskers will be more relaxed and
pushed forward.
• Cats don’t have a true collar bone, which allows them to twist their way through very narrow openings.
• ‘To be the cat’s whiskers’ is a British idiom meaning ‘to be better than everyone else’.

Apart from these facts, whiskers help the cat to orientate itself in the dark. According to scientific evidence, whiskers and eyesight are interconnected, allowing the cat to be one of the most adroit animals on its way through darkness and night hunt. We can easily check this statement: if we touch the end of cat’s whiskers, it will blink. Owing to its linking with the nervous system, whiskers show extreme sensitivity and enable the cat to sense every slightest change in airflow. That facilitates the cat’s moving during the night: air current between the pieces of furniture is changing its flow; the cat can feel it and avoid bumping into the furniture all along its night’s walk. Bearing all of these in mind, we could only admire this wonderful creature for its magnificence and uniqueness.