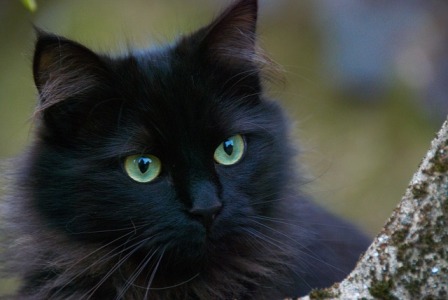 During human history, cats have always been an integral part of the human environment, living together in a peaceful coexistence at times, and occasionally going through utterly hard times. Cat’s relationship with humans has been evolved during the years, but was very consistent and stable at its core. However, man’s behavior toward cats has greatly varied through the ages, taking extremely hostile and oppressive attitude, from time to time, especially toward black cats. This behavior, which goes from worshipping the cat as a goddess, and then turns into its extreme, equating cats with witches and persecuting them, does not say anything about cats, but much more about humans and their difficult and complex nature. The article “Myths and Facts About Black Cats“, lists common myths and facts about cats, that has been spread throughout history.

• Black cats became associated with bad luck due to the belief that they were witches’ familiars.

• Some black cats are actually dark brown. This will mainly be visible when Kitty is sleeping in a sunbeam.

• There are officially 22 breeds of kitties that can be all black.

• The Bombay cat is the only breed of cat that is all black. It is often said to resemble a miniature panther. (Panthers, ironically, are actually not true
black.)

• Black cats often have a hard time getting adopted, in large part because of the superstitions.

• 13% of Americans are superstitious about black cats.

• Celtic mythology includes a fairy that takes the shape of a black cat.

• Because black cats are vulnerable to pranksters, some shelters suspend the adoption of black cats around Halloween.

• England’s King Charles I had a black cat. As legend has it, when his kitty died, he was heard to say “Alas, my luck has run out.” He may not have been
wrong, because he was arrested for high treason shortly afterwards.

• A French myth holds that if a black kitty has even one white hair, that cat will bring good fortune to its owner.

• The richest cat in the world is an Italian black cat named Tommaso. Tommaso inherited $13 million when his owner died.

Although the common myths and superstitions about cats originate in the Middle Age, they are still present in our society even today. A high percent of people still believe in superstitions about black cats. Even though cat lovers do not share these false beliefs, a long history of black cats discrimination has not faded. Many shelters and rescue workers confirm this sad truth and know how hard is to find a new home for a black cat. They regularly organize various activities that offer benefits and stimulate people to adopt unfairly discriminated cats. Their goal is to bring equality in cats community and help every cat to have a normal life.