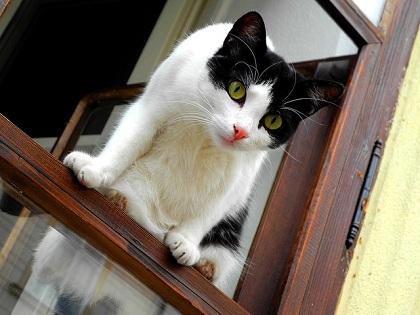 In urban settings, the common issue that affects many cats is known as high-rise syndrome. Namely, one veterinarian clinic in New York named the issue when they realize that three to five cats per week, who fell from high buildings, were their patients. The number of injured cats was bigger in the summer. What they have also found out was that almost 90 percent cats, who were affected by the high-rise syndrome, recovered successfully from injuries. The worst injured were the cats who fell from the heights of 2 to 6 stories. Paradoxically, the cats who fell out from a story above 6th were slightly affected by the accident. Feline experts explain this phenomenon by cat specific trait to turn into a position that helps them land firmly and flexibly on their feet. The worst injuries are found in cats that fell from lower heights, for they lack time to turn themselves into correct posture and land safely. Veterinarians appeal to take precautionary measures because the high-rise syndrome is absolutely preventable. According to them, cats will not deliberately jump from the heights. They are great survivors and can perfectly estimate when it is safe to jump or not. The problem with the high-rise syndrome is in the cat’s ability to focus intensely on their prey. When prey appears, they become almost obsessively focused on it and lose their ability to judge the situation by using their perfect senses. When they fall from heights, the most common injuries from the high-rise syndrome are numerous. The article “High Rise Syndrome” quotes the following:

To prevent a cat from the high-rise syndrome we should provide protection screens for our windows that will make them safe even when we open them in the summer. It is also risky to let a cat out on a terrace or fire-escape unsupervised. To help an indoor cat remain safe and interested in his/her environment at the same time, we can place a window perch in front of backyard windows or some other place that will provide him/her with a lot of stimuli. Regardless, experts recommend transporting an injured cat immediately to the vet, because every cat who fall from heights has a 90 percent chance to survive, although we can conclude quite opposite.