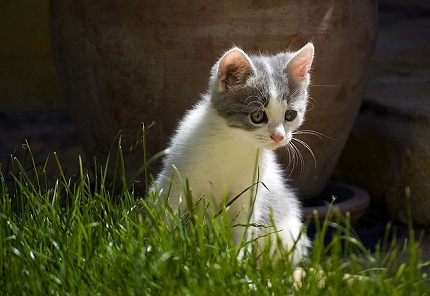 A recent study reveals an interesting conclusion when researching the subject of cuteness and how we respond to it. Namely, Rebecca Dyer, a graduate student in psychology at the Yale University has decided to conduct research after speaking with her fellow students on their reactions to cute animals. They all share the same impression when to watch or speak about cute animals. According to them, it does not matter whether we have in mind little kitten, adorable puppy, or some other baby animal, we always have similar reactions. Many of us want to squeeze the fluffy little thing, and we often get the same sensation – we cannot resist it. From the study, they came to a term named “cute aggression”. It might seem odd, but it is not aggression as we know it. This type of aggression is rather a way to express our strong feelings when to encounter pure little kitty or puppy. It resembles on that type of emotions such as great happiness or joy that moves us to tears. Probably, it can be about the level of intensity that turns into its opposite. To find about more about the study and get an idea on how we respond to cuteness, the article “‘I Wanna Eat You up!’ Why We Go Crazy for Cute” offers us the following explanation.

Dyer said she and her colleagues aren’t yet sure why cuteness seems to trigger expressions of aggression, even relatively harmless ones. It’s possible that seeing a wide-eyed baby or roly-poly pup triggers our drive to care for that creature, Dyer said. But since the animal is just a picture, and since even in real life we might not be able to care for the creature as much as we want, this urge may be frustrated, she said. That frustration could lead to aggression. [10 Things You Didn’t Know About the Brain]

Alternatively, people could be trying so hard not to hurt the animal that they actually do so, much as a child wanting to care for a cat might squeeze it too tightly (and get scratched for the effort).

As we have seen, people tend to have the most intense emotions to cute animals. Funny animals do not provoke such emotional responses. For that reason, evolutionary psychologists hypothesize that these reactions are linked to babies and represent our need to take care of them. We all have the same urge when encountering with babies – to protect their vulnerability. Therefore, the pure biological instinct underlies our connection with babies as well as with cute animals. Some people even report that type of intensity by saying that some animal is so cute that they want to die. For some scientists, this mechanism appears as a result of getting control over so intense emotion. It might be that scientists are still struggling to explain why we adore our little kittens, puppies or other young animals, but they came to the interesting discovery.

Tags: How Do We Respond to Cuteness?