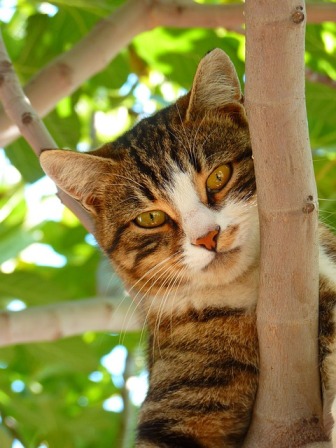 As cat owners, we often assume and take for granted that cats are very intelligent beings. When we watch them opening the door, drinking from the top, or even flushing a toilet, we are amazed how smart it is. Not to mention how impossible is to trick their senses if we want them to eat the pill taken from vet or force them to try healthier food instead of their favorite. We can easily recall the last time when we try to lure our cat into a carrier and go to the vet; its resistance seems to speak about her long-term memory. Whether cats are smart is not questioned by cat owners, for them they certainly are. However, let us explore how cat’s brain and memory work. The article “Do Cats Have Long-Term Memory?” describes how cat’s intelligence functions.

Kitty’s Brain
Kitty’s brain, while smaller than yours, is a lot like it. He has frontal, temporal, occipital and parietal lobes just like a human brain. His brain is also made up of white and gray matter. The same five senses send information to his brain.
The most accepted theory about how Kitty remembers things is called neural combination theory. Kitty has connections between the neurons in his brain. Each neuron stores a part of a memory, and when the right combination of neurons is activated, Kitty will recall a memory.

Kitty’s Memory
In one test of where to find food, cats’ short-term memory lasted about 16 hours, compared with only five minutes for dogs.
Long-term memory for a cat is more powerful. Although a cat might lock only a few people or places into his long-term memory, he can remember them for years. He can remember certain places or people for most of his life.
The most impressionable age is 2 to 7 weeks old. If a feral kitten his no interaction with humans during this period, he might never trust them. This is also the period when a domesticated feline learns to trust and depend on his human companion.

Learning Ability
A cat’s memory and decision-making skills are on par with those of a 2- or 3-year old. He learns by observation. He can learn how to open doors by watching you do it. He’ll learn how to hunt and groom himself by watching his mom.
He’s also capable of solving puzzles. If you’ve seen Kitty jump onto five things just to snuggle on top of your refrigerator, you’ve witnessed this ability.

Senior Kitty
As Kitty ages, his brain function will decline. Feline cognitive dysfunction is a disease similar to Alzheimer’s in humans. It is caused by deterioration of the brain itself, leading to reduced cognitive functioning. A cat with this condition has trouble getting around, because he becomes disoriented easily.
Accidents outside his litter box are likely, because he might forget where it is or what it’s for. He might become more anti-social, retreating to spend long periods of time by himself. Just as with humans, his memory won’t be as sharp as it was in his youth.

Cats, unlike dogs, are not interested in trainings; they are only interested in highly-rewarding activities. If they expect their favorite food at the end of the game, they can eventually give it a try. But, trainings are not a cat’s favorite game. They are less sociable than dogs and do not bother themselves much of owner’s praise. As known as animals who like solitude, are they intelligent enough not to allow becoming human’s slaves?

Tags: How Intelligent Are Cats?