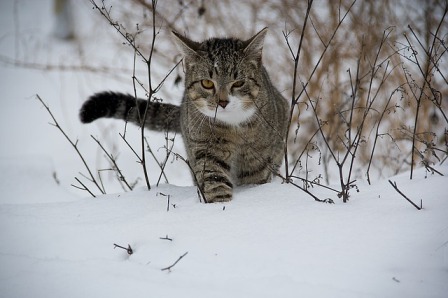 Cats have not organized themselves into packs, as dogs and wolves. Until recently, it has been considered that cats’ families have not any social structure, except lions. However, recent scientific researches have proven that Cheetahs, Bobcats, and even domestic cats, have developed some kind of social hierarchy. That slightly modified a concept of cats as solitary animals. Indeed, if we live with a few cats, we can notice some kind of hierarchy among them. In such circumstances, we can easily observe a cat, who behaves bossy. Even if we live with one single cat, from time to time we can witness its bossy behavior imposed on us. The article “5 Ways to Deal with a Demanding Cat” gives us some suggestions on how to cope if this bossy behavior continues.

1. Don’t treat your cat as a small dog. Dogs usually respond appropriately when ushered into a closed bedroom or bathroom when annoying you or houseguests. Time outs do not work so well on cats. It doesn’t take much energy to meow for a long time. So, when you do usher your cat into a safe room, make it pleasant and engaging for your cat by providing a soft place to nap, food and water and a keep-busy toy. Also clip his claws so he won’t damage the doorframe by scratching.

2. Schedule daily play sessions with your cat – ideally 5- to 10-minute sessions in the morning and at night. Have him stalk and pursue a feather wand toy
down the hall. Crinkle paper wads and toss them for him to chase and hunt.

3. Dine together. Some cats feel vulnerable when they lower their heads into food bowls to eat. They feel safer when they can eat their meals close to you
while you eat your meal.

4. Practice the art of compromise. Position a cozy cat bed on your desk to stop your cat from standing between you and the computer monitor. For cats who
dash into the kitchen each time you do, consider locating a towering cat tree near the kitchen to enable your cat to view your moves from a high secure
perch. Be happy that your cat enjoys your company and wants to be with you.

5. Avoid engaging your cat in chatty conversations. The secret is to never answer a talkative cat when he meows. You unintentionally are encouraging him to
continue the conversation louder and longer.

Sometimes, a cat which appears as bossy one is usually “alpha cat”. Alpha cat is dominant and bossy by its own nature. It can meow loudly if its meal has not been served on time, or the food is not its favorite. It can also lie on a keyboard when its owner tries to work on the computer, or settle down on a newspaper or a book, while the owner is reading. Usually, if we try to drive the cat away, it can act aggressively and attack ourselves. In this case, it is important to establish new priorities, make it clear who is in charge, and ignore dominant behavior. When the cat realizes that we are the boss and it is a cat, our relationship will be able to blossom.

Tags: How to Deal with a Bossy Cat?