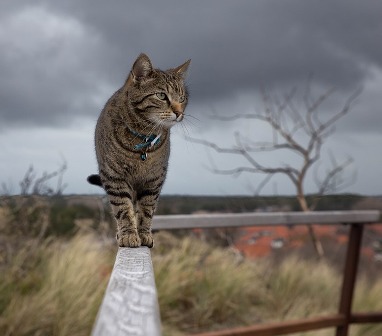 For indoor cats, cat fight is almost never an issue. However, for outdoor cats, whether neutered or not, cat fight is a regular part of their lives. Whenever their territory is threatened, their natural instincts wake up and put a cat into the fight with another cat to protect their territory. Even though we cannot prevent the cat from the fight, we can minimize the risk. The best way to lower the risk is to neuter the male cat or spay the female kitty. In this way, the cat will defend much smaller territory than unneutered ones. On the other hand, male cats, although neutered will be more territorial and aggressive than spayed female cats. It is because the males are in general more territorial than females, simply because the gender. A good way to calm their fighting instincts is to limit their activities to daylight. Cat experts warn us on the frequency of night fights and suggest not allowing the cat to go out during the night. According to them, the majority of cat fights happen after dusk. If the fight happens, there are some things we can do to help the cat healing the wounds. The article “Treating a Cat Fight Abscess Wound at Home” gives us some practical steps on how to treat fight wounds in cats.

First, use gauze with an equal mix of warm water and hydrogen peroxide 3% to clean away any oozing fluids around the wound and in the cat’s hair. Don’t use tissues or cotton balls, as these leave fibers in the wound and aggravate the infection. Soap isn’t recommended, because it can leave residue or dyes in a raw, open wound, causing further complications.

Use the tweezers to remove any debris in the wound. Carefully trim any long or matted hair around the wound. If there’s any hanging skin, leave it, but be sure it doesn’t fuse into the wound. Cutting away skin will hurt the cat and can cause more bleeding and infection. Hanging or abraded skin will usually dry up and fall off by itself as the wound heals.

As we have seen, it is not possible for the outdoor cat to avoid the fight. Therefore, wounds and abscesses can appear from time to time. In general, they are not life threatening, but some of them carry that risk. We have to be cautious when the cat gets an abscess, because of its consequences. Apart from cleaning and sanitizing the wound, we should take care of the cat’s overall health condition during a few following days. Any changes in its behaviour can indicate a bacterial infection. In the worst case scenario, this could even mean developing one of the two deadly diseases in cats, such as Feline Immunodeficiency Virus (FIV) and Feline Leukemia Virus (FeLV). If we notice some changes in the cat’s usual behavior and habits after abscess occurs, taking the cat immediately to the vet can prevent it from serious consequences.

Tags: How to Treat Fight Wounds in Cats