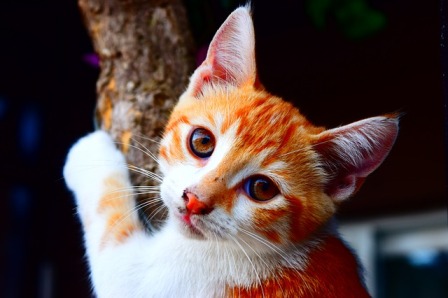 Among all domestic animals, cats‘ specific nature has always puzzled humans, who often fail to understand it and grasp its essence. During history, people adored cats and assigned them divine qualities like in Ancient Egypt, or saw them as a personification of pure evil like in the Middle Ages. Cats’ independent nature often provokes strong admiration in people that causes their huge ambiguity when it comes to this beautiful animal. Therefore, ones have unconditionally worshipped them and put them on a pedestal, while others were completely afraid of them. Cats have always been difficult to control and those who have tried to suppress them labeled them as human’s enemies. Since then, many centuries have passed, but stereotypes have survived. Today, many people believe that cats are aloof, self-sufficient and mind only their own business. According to them, cats do not care about humans and are only interested in food. Many of them still believe that cats are sneaky, grouchy, stubborn, and lazy. Maybe these stereotypes have survived because of highly social and expressive nature of dogs – their greatest rival pet. When compared to dogs, cats are less expressive, but they are still loving and affectionate. Every cat owner knows what this simple act of rubbing its snout, poking a head, or goofing near the owner, means. The article “Are You a Racist When It Comes to Cats? 8 Stereotypes Based on Breed and Markings” lists stereotypes among cats that many people consider as truth.

1. Ginger cats are more friendly than others

2. Ginger cats are also thought of as more aggressive and flighty

4. Torties and calicos are stubborn and temperamental

6. Siamese cats are crazy and demanding

One of the biggest stereotypes that surround cats is they are emotionally detached, do not like cuddling and want affection only in their time. In reality, many cat owners know that cats are the great comforters. They can somehow sense when their owner is in a bad mood or is affected by illness. It is no wonder that a cat will jump immediately into its owner’s lap and try to soothe her/him when necessary. Cats are also good at sensing the emotions of other people, and they unmistakenly go straight forward to a person with the biggest problem in the room. Even though there is no scientific proof of that, daily life with a cat teaches pet parents this simple truth.