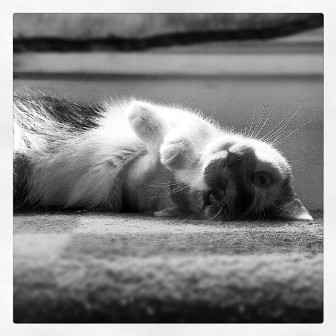 As cat owners, we all are able to recognize when our cat is content, angry or upset. Cat’s body postures we can read instinctively, especially when it is followed by sounds. The main part of cat’s communication goes through its tail, ears and eyes. Although, we are accustomed to individual body language of our cat, we can find ourselves, from time to time, wondering about its strange behavior. For example, the cat used to roll over when sees us coming home, exposing its belly, as wanted to be petted. How many of us were surprised when try to stroke its belly and provoke its aggression instead? The article “7 Weird Cat Behaviors Explained” points out to some specificities of the cat’s body language which are not easy to decipher.

The first three months I had my cat, her head turned pink from head-bonking my lipstick. Rubbing behavior, which includes the forehead, cheeks, and full-body slams, is called bunting, and it transfers the cat’s signature smell onto objects to mark territory. That means head bonks are kitty compliments declaring you to be so important, he’s marked you as his personal property.

Many cats come running when owners talk on the phone and they pester and meow like they want in on the conversation. What gives? Your cat sees you talking and since there is no one else there, thinks that you must be talking to them. Also, without realizing it, you may be rewarding that behavior by stroking the cat while you are sitting and talking on the phone, which encourages your kitty to come running next time the phone rings.

Why do cats throw themselves onto the ground at your feet and flip back and forth? Sure, sometimes it is because a cat is under the influence of catnip but more often, rolling back and forth places a cat in a vulnerable position, and is a way for cats to request attention. If you you grant the kitty’s wish and fuss over it, your cat knows to do this again the next time he wants your love.

Owners take for granted that all cats naturally choose to cover potty deposits but this isn’t the case. Some cats — especially unowned roaming felines — may not cover at all as uncovered feces can announce who owns the territory. Some indoor cats also want their potty graffiti seen and admired by the other cats or humans. Though is mom-cat is fastidious about covering her mess, her kittens will copy-cat the behavior.

There are many names for this common rhythmic paw-pushing kitty behavior — treading, making bread, even “pawtycake.” But one thing is clear, the behavior takes hold when felines are very young, as kittens knead against mom-cat’s breasts to stimulate milk flow. When adult cats knead, it generally reflects deep contentment and safety, and yes — love. Cats typically target soft objects such as fuzzy blankets, pillows, or a beloved owner’s lap.

Why do some cats immediately seek out their humans the minute they head into the bathroom? First, a closed door is a challenge and an affront to a curious cat which is one reason why you’ll see furry paws reaching under the door or cats racing to join their people in the bathroom. More importantly, the bathroom gives cats a captive audience as people glued to the facilities aren’t able to move away.

Nevertheless, every cat is unique, and its behavior can vary during the years. Knowing the cat’s body language can help us not only to communicate and better understand our own cat, but also, to discover when the cat really behaves strangely. These weird behavioral patterns, as quoted above, many cats have in common and they appear as normal. If we know how to recognize whether the cat is just behaves weird or really strange can be of crucial importance. This strange behavior can often imply that her territory has been threatened or that our cat has some health issue. The more we know about our cats, the better we will take care about them.

Tags: How to Understand the Cat's Body Language - Weird Behavior