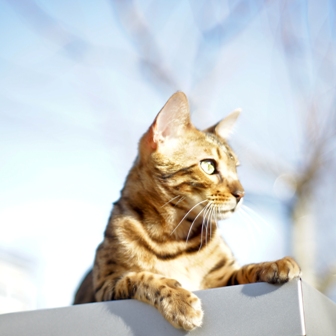 Although, the cats cannot do many things like humans, such as calculating some formula, using their hands to prepare the meal, speaking languages etc., that does not mean they are inferior to us. On the contrary, they developed all their senses to such an extent that cannot compare with ours; just to mention the sense of smell that is fourteen times stronger than in humans. During the ages, it has been speculated that the cats have a sixth sense and we all know at least one example of cats sensing the earthquake, fire, or some other danger. Whether it is a result of the cat’s instincts, sixth sense or its largely developed senses in general, we are aware that the cat’s can much better feel its environment than we can. Let us see the list of 15 fascinating facts about the cat’s senses as published in the article of the same title written by Victoria Swanson.

A Cat’s Sense of Sight

#1. Cats have better night vision. Cats have better vision for night than for day. Their eyes have a wonderful ability to reflect light as it passes through the retina, providing them with optimal night vision and also making their eyes seem to glow in the dark when light hit them.
#2. Cats have slit-like irises for a reason. Cats have poorer eyesight during the day so their slit-like irises help to reduce daylight sensitivity.
#3. Cats have a wider field of vision than us. Cat’s have a 200° angle of vision versus humans which is 180°.
#4. Cats are NOT color blind. Contrary to belief cats are not color-blind; they can see red, blue, yellow and green lights.
#5. Cats have a third eyelid. Cats have a third eyelid and unlike humans they do not need to blink often (less lubricating) which gives them a better advantage for hunting.
#6. Cats talk with their eyes. Squinting their eyes however is a form of communication, sometimes blinking one eye at a time and much slower than a human’s blink. Ever noticed your cat look at you and slowly squint their eyes closed? That’s a sign of deep affection and you should return the gesture! 🙂

A Cat’s Sense of Smell

#7. Cats are super smellers. Fourteen times stronger than a human’s sense of smell, makes the cat’s nose an amazing part of their sensory. A cat’s nose helps it to identify food, objects, locate prey and other individuals in their environment. Cat’s have about 200 million olfactory receptors (odor-sensitive cells) in their nose compared to a human that has about 5 million!

A Cat’s Sense of Hearing

#8. A cats sense of hearing is 3 times better than ours.Do you hear the squeaky sound of that mouse? For a cat, that high pitch squeak is exemplified three times higher than what you are hearing. Their radar-like ears can single out noise up to four to five times farther than a human!
#9. Cats have rotating ears. Their ears can rotate in various degrees with even the capability of making one of their ears point backwards to listen. Their intuitive hearing can help make the cat a very successful hunter by pinpointing the exact location of their prey within three inches.

A Cat’s Sense of Touch

#10. Cats have whiskers everywhere – not just on their face.Those incredible whiskers are a cat’s primary touch receptors. Whiskers are not just on a cats face, they are located on their front and back legs and over their eyes (those are not eyelashes).
#11. Cats have 3D whisker technology. Whiskers have a high degree of nerve endings at the base, when triggered the nerves send the brain a three-dimensional map of their surroundings. The whiskers help determine if a cat can move between two objects by gauging the distance. Whiskers will also help the cat guide their way through night by the cat moving their whiskers forward, making the whiskers an important part of their sensory code.

A Cat’s Sense of Taste

#12. Cats have no sweet or salt tooth. Only recently it was discovered that the cat is unable to taste sweet and salty foods. Cats will typically turn away from a sweet or salty type food preferring more of a meaty food.
#13. Cats prefer savory tastes.Their taste of choice is high-protein and high-fatty foods, making them a carnivore that prefers a meat-based diet.
#14. It’s all a little blander to cats.Compared to a human’s taste buds of 9,000, the cat has approximately 475.
#15. Cat rely on their nose to taste. They tend to use their nose versus their taste buds to determine if the food they are smelling is something they wish to devour. That is why cats are sometimes consider “finicky” eaters according to their owners. The cat will smell and lick several times before determining if they will eat their whole meal.

To have this extrasensory being for the pet is not always easy. How many times have we tried to trick our cat to take the pill from the vet, or eat the new food, we think is better for her? Or, how much effort does it take to get the cat in the career? This intelligent animal with heightened sensitivity is hard to trick. The cat’s highly evolved senses give her an aura of enigma for ages, just to mention ancient Egyptians. It might be that in our modern times, there is nothing else for us, as the cat owners, but to do as they did – to admire the cat.