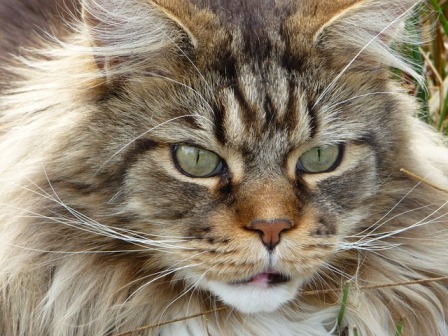 Maine Coon cats‘ mysterious appearance, their large bodies, lavish coat, and kind nature make them one of the most popular cat breed. This very juncture of their beautiful looks and charming nature give to their breed a sense of uniqueness and specialness. They are known as “gentle giants”. Their largest bodies can weigh up to 20 pounds, and their length can stretch to amazing 48.5 inches or 123 cm. They are also known as the breed that gave birth to a longest cat, which has been written in Guinness World Records. The popularity of the Maine Coon cats was at its peak in 1895, when Cosey, the Maine Coon cat, won the first North American cat competition, held at the Madison Square Garden in New York City. After a time, their popularity started declining, but the breed has survived a lack of people’s interest and retained their popularity as a second breed after Persian cats. They always evoke greater interest among people, and it is no wonder that many stories are spread around their origin. The article “America’s First Show Cat – the Maine Coon Cat” provides us with the common myths about the appearance of the Maine Coon breed.

Many people once believed the Maine Coon Cat originated by interbreeding the American bobcat with the domestic cats brought to North America on the various sailing ships that came to the Northeastern seaboard. Probably the tufted ears and feet of the Maine Coon Cat, which are similar to the bobcat’s, gave some credence to this legend. The tuft curls outward from the inside of the ears and tufts of fur are found between the toes. Taking fantasy one step farther is the belief that the domestic cats of New England bred with raccoons. The early Maine Coon Cats may simply have looked like raccoons to the natives, since the brown tabby, with its bushy ringed tail, occurs most commonly in nature. The Maine Coon Cat also converses occasionally with an endearing trill or chirp, somewhat like the cry of a young raccoon. It is genetically impossible for domestic cats to breed with either raccoons or bobcats, as we in the cat fancy know, because they are of different genera and do not hybridize.
Another tale is that the Maine Coon Cat’s ancestors came from Norwegian Skogkatts brought over by the Vikings. A letter from Mrs. Jack Bjonness to Mrs. Rod Ljostad describes them as follows: “The head is longer than that of the shorthaired domestic. The coat is about half as long as that of the Persian. They come in all colors, the ears are high with lynx tufts, the whole cat is ‘tall’ not Cobby like a Persian. But no one could say it is a slender cat. They are “hardy.”
More romantic versions of the Maine Coon Cat’s development have been handed down over the years. The first involves Captain Samuel Clough and Marie Antoinette. Captain Clough was one of the principals (or so the legend goes) in a plot designed to smuggle the French queen out of France and bring her to Wiscasset, Maine. The scheme was cut short, but not before Clough had loaded his ship, the Sally, with luxurious furnishings, priceless bric-a-brac, some of the queen’s personal belongings, and six of her favorite pet cats. While Clough waited, there was a sudden outburst of violence. Marie Antoinette was seized, and eventually beheaded. Captain Clough had to make sail with all haste to escape repercussions for his part in the attempted rescue and with him went the queen’s possessions and the six longhaired cats still in his care. It is assumed that the queen’s cats bred with the American cats and voilˆ – the origin of the Maine Coon Cat.
Still another legend concerns an English sea captain, improbably named Coon, who was excessively fond of cats. He sailed up and down the New England coast with his army of cats. Predominant in the group were his longhairs – the Persians and Angoras that were popular in England. When the captain went ashore, so did his cats. When longhaired kittens began appearing in local litters, the owner’s comment would be “one of Coon’s cats.”

Known as a social and family oriented breed, the Maine Coon cats are ideal for a household with children or other pets. Their warm-hearted and gentle disposition easily bonds with all members of the family. Although they represent tolerant and relaxed breed, they do not like being lap cats. They are highly intelligent and independent cats, which belong to one of the loudest cat’s breed and like arguing with their owners. Unlike other cats, they are fond of water. Probably, the Maine Coon’s specific, almost water resilient coat, helps them to stay dry. To the Maine Coon’s charming look contributes their oversized paws that are known as snowshoe feet, which help them to navigate through the snow. As some people like to say, this is the breed easy to fall in love with, but it is easier to stay in love because of their character.