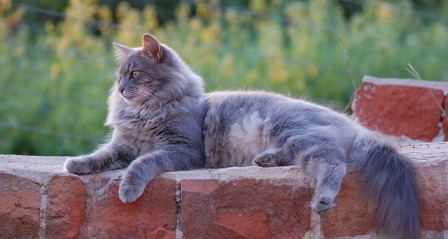 Nebelung cats, a newly discovered cat’s breed, are known as “Creature of Mist”. They acquire a name from German word Nebel, which means mist or fog. Their silky silver-blue coat, yellowish-green eyes, and plumped tail give her mystical appearance and elegance. Not only has their physical appearance brought them that mystical look, but also their temperament. Nebelung cats are pretty shy; they bond only with its owners and are not interested in strangers. They move away from loud noise and do not tolerate changes in their daily schedule. They rather move around quietly as shadows. Apart from their quiet and highly sensitive nature, they appear as playful and curious about the surrounding. The article “Nebelung Cats – Breed Profile and Facts” lists some facts about this mystical breed, Nebelung cats.

Nebelung information | features
________________________________________
The overall look of the Nebelung is a long, sturdy and well balanced cat that is well muscled and graceful. Come to think of it, everything about the Nebelung is long – coat, legs, tail and body.
Its tail is long, about as long at its body. The hair on the tail is long with a thick plume and the tail hair is longer than the body hair.
You guessed it, the legs are long and medium boned and the paws have tufts of hair between the toes.
Due to the long fur, the neck appears short, but it is in fact slender and long and somewhat graceful.
The Nebelungs head is shaped like a modified wedge with sharp contours. The muzzle is medium in length with puffy whisker pads. Its ears are pointed, quite large and with tufts of hair on the back.
Its wide-set eyes are medium in size and slightly oval in shape. The color should be a vivid green, but a yellow-green is also acceptable.

ideal home | ideal family
________________________________________
The Nebelung prefers to be outdoors.
Outdoor living is ideal provided that the outdoor living area is a safe, escape-proof enclosure.
It can adapt to indoor-living provided that you create an ‘adventure zone’ for your cat. Any cat that feels confined will present with destructive behavior.
Nebelung cats do not enjoy clumsy handling or rough play. So unless the family has older children versed on how to handle cats, it is not suitable for a family with toddlers.
The ideal home for a Nebelung is with a mature family or retired couples seeking a companion cat.
The good news is that they do tolerate the company of other cats and get on well with cat-friendly dogs.

Although Nebelung cats gain their full recognition as a breed in 1997, they are still rare breed, widespread through European countries like France, Germany, and Italy in spite of its American origin. It is easy to mix up Nebelung cats with Russian Blue. Indeed, they originated from Russian Blue and can outcross with them, but they represent unique breed. Nebelung cats have long, dense, and silky fur, unlike Russian Blue coat, which is short and not so rich or soft. These two cat’s breeds show, also, some differences in their temperament. Thus, Nebelung cats are affectionate and lively, but not so easy going, as are Russian Blue cats. Russian Blue cats are more open, expressive, and loving creatures. However, for those who like elegant, soft, and mystical appearance of Nebelung cats, they are the best match.