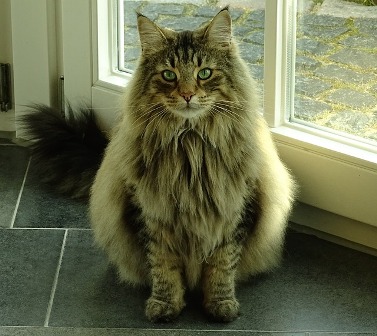 One of the most beautiful cat breeds in the world is a Norwegian Forest cat. This strong, long-haired, almost mythical cat, is very popular in Scandinavian countries (Norway and Sweeden), Iceland and France. Similar to American Maine Coon cats, this cat breed gained its status in 1970. However, Norwegian Forest cats had entered the European ground around 1000 AD with Vikings. It is believed that the ancestors of Norwegian Forest cat had hunted mice and rodents on the Vikings’ fleet. It is assumed that Turkish Angora and Siberian cats were among them. In Northern countries, they had mixed up with domestic, European cats thus creating a completely new breed known as Norwegian Forest cat. In Norway, this cat is known as skogcatt, which means forest cat. After the Second World War, this natural breed was almost extinct, because it was not yet recognized as the breed. Fortunately, a cat fancier, Carl-Fredrik Nordane, initiated a process of registration for this amazing breed, thus preventing it from extinction. To learn more about Norwegian Forest cats and their personalities, the article http://cattime.com/cat-breeds/norwegian-forest-cats describes the common traits.

The gentle and friendly Norwegian Forest Cat—Wegie, for short—is fond of family members but does not demand constant attention and petting. He is satisfied to be in the same room with people and will entertain himself if no one is home. Although he appreciates human company, he can be a bit reserved with visitors. Even with family, he’s not much of a lap cat, but a nice scritch between the ears or beneath the chin is always welcome, and he’ll usually reciprocate with a nice head butt or cheek rub. He communicates with classic Scandinavian restraint. His quiet voice is employed only when he needs something—dinner on time, perhaps—and rises only if he is ignored.

Not surprisingly, this large and athletic cat is a climber. You will often find him at the highest point he can reach in the home, and unlike some cats, he doesn’t have any qualms about descending trees or other heights headfirst. Thanks to his heritage as a wilderness and farm cat, not to mention his waterproof coat, the Wegie thinks nothing of fishing in a body of water for a nice meal. Aquarium and koi pond denizens, beware! While he loves the outdoors, he is content to live quietly in a home.

This is a smart, independent cat who learns quickly and has an alert nature. He likes to play and thrives with a busy family that loves him.

Physically, these cats represent strong and powerful breed, able to survive cold, harsh climate of Norway. Their coat has two layers – the outer layer that is waterproof and undercoat. The undercoat of Norwegian Forest cat is made of wool that is a great insulator, which preserves their temperature. During spring, these cats shed and lose entire undercoat. This hardy and adaptable cat breed also has tufts on ears and feet, which give them an impression of wearing boots. This breed is unique in its ability to articulate birdlike voices. Unlike the majority of cats that meows, these cats meow only when talking to people. But, when talking to each other, they use high-pitched birdlike sounds. These interesting cats can be wonderful pets with a long lifespan of 14 to 16 years.