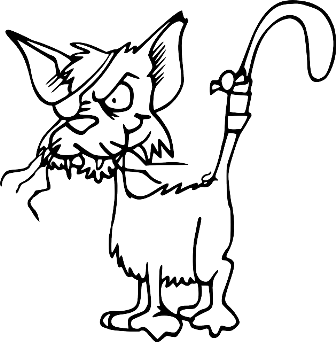 The year 2015 was extremely turbulent for Bart, a Zombie cat. This black and white cat from Florida was struck by a car and got serious injuries. Bart’s owner, Ellis Hutson, when saw the poor cat with traumatic injuries, concluded he was dead and decided to bury him. However, Hutson was shocked when the cat appeared fully alive after five days in the neighbor’s yard. Unfortunately, many people did not believe in this story. In fact, it caused a lot of controversies. This controversy became the main reason for a custody battle between the Humane Society of Tampa Bay and Bart’s owner, which is still going on. The accident left Bart with severe injuries that caused him went through a series of surgeries and needed time to recover fully and completely. He got several face wounds; his jaw was badly hurt, and one eye went blind. Even though Bart was buried alive and went through the traumatic ordeal, he is now happy, fat and safe. The article “Bart, the ‘Zombie Cat’ Appears in Photo Fluffy and Healthy” assures us that Bart is now a healthy cat that admires a good nap, like any other cat.

A photo posted on Twitter by the Humane Society of Tampa Bay shows Bart, who was scrawny and disheveled a year ago after being hit by a car and buried, now with full, beautiful fur. He has put on some weight, too, almost too much weight, said Humane Society Director Sherry Silk.

The photo was taken of Bart when he came in for a checkup recently. He is now staying at a foster home with two other cats and they all get along well, Silk says.

Bart has been in the custody of the Humane Society for about a year while they try to get custody to find him a home. The case is currently in court because his owner, Ellis Hutson, refuses to give up ownership.

Although a custody battle may take some time, Bart, the Zombie cat, already has a reliable and caring foster parent that takes a good care of this special needs cat. After the legal proceeding, he will be ready for adoption and able to find his permanent home and a new family. Until then, he will take its time to recover fully, because he is not as firm and strong as he was before the accident. Even though his owner does not want to give up from Bart, the Humane Society of Tampa Bay thinks that he is not reliable enough to properly take care of the cat with special needs. They think that the best option for Bart is to be adopted again. So, let us see how it will turn out in the end.