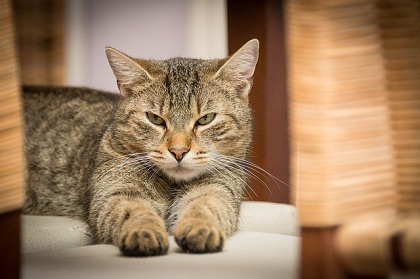 Kidney failure is one of the main causes of death among cats. According to experts, chronic kidney disease or CKD is unavoidable in household cats. However, the same statement is far from the truth for feral cats. It is because household cats live longer, and kidney failure is related to age. Namely, according to feline experts, more than ten percent of cats aged over ten are prone to kidney disease. Furthermore, one-third of cats aged over 15 years tends to develop this disease. For that reason, experts recommend regular health check-ups for our cat, especially if a cat is above the age of eight. According to some, there are not much we can do about this type of ailment, except early detection. They also warn us that the disease often gets unnoticed until it becomes serious and incurable. It is because kidney failure in its early stages does not show any symptoms. When some symptoms, such as vomiting, excessive drinking, frequent urinating, bad breath or weight loss appear, it is usually too late. Moreover, cats tend to hide the illness and will do whatever they can to mask their condition. In this way, kidney failure can be detected most earlier during some accidental medical exam. But, in every other case, the general condition of a cat looks pretty normal and when the disease is being discovered, there is not much we can do about it. But, we can do more for our cats if we begin early. Namely, one of the most important factors that affect kidney’s health is diet. To prevent or to postpone development of kidney failure in cats, experts recommend using wet food instead of dry food. The article “Preventing Deadly Feline Kidney and Urinary Disease with a Simple Cat Food Choice” gives us the following description that helps us better understand the role of diet in an occurrence of kidney failure in cats.

“Cats eating commercial dry foods will consume approximately half the amount of water (in their diet and through drinking), compared with cats eating canned foods… In older cats that tend to produce urine with a lower concentration, an increase in water consumption becomes even more important to avoid dehydration and development of prerenal azotaemia” Zoran DL, Journal of the American Veterinary Medical Association

“Contributing factors to the disease [chronic renal failure in cats], other than age, include genetics, environment and disease. I would also add diet to that list, as CRF is very often seen in cats that are fed only dry food.” Karen Becker, DVM

To prevent younger cats from acute kidney failure, we can do more. Acute kidney failure appears from different reasons that have nothing in common with the causes of the chronic kidney disease. Usually, the causes are toxicities, infection or shock. To help a cat stay away from toxins, we should avoid planting lilies and other toxic plants. Ethylene glycol antifreeze and some medication can also trigger kidney problem in cats. For that reason, experts strongly recommend consulting a vet before we give medicine to a cat.

Tags: How to Prevent Kidney Failure in Cats?