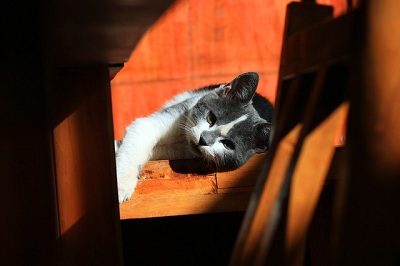 Cats are very skillful when they want to mask the signs of illness. They do not speak and tend to hide their real health condition when are in trouble. The same is true when it comes to fever. They are trying too hard to mask the symptoms of fever and withdraw from our sight. Cats are not willing to share their vulnerability with us. Even though they spent more than 9,500 years in proximity to people, they still retain many traits that their ancestors had developed long ago. In the wild, their ancestors had a lot of natural enemies and hiding vulnerability had been a matter of survival. According to feline experts, cats are small animals and their strength is to be stoic and mask their real condition. However, if we are well informed and know a cat well, it will not be so hard to spot changes that indicate that something is wrong with our feline friend. Fever is not a serious health condition by itself. But, when fever is one of the symptoms of some feline disorder, it should be taken more seriously. Sometimes, fever can be a sign of bone fracture, lupus, or even tumors. However, in many cases, fever is just a part of the body’s immune response to viruses and bacteria. It is how our organism tries to fight all harmful microorganisms and heal itself. To recognize when a cat has a fever and learn more about the symptoms, the article “Cat Fever – Causes, Symptoms & Treatment” gives us the following list.

5. Pain and tenderness when touched (hyperalgesia).

Some people believe that a dry and warm nose in cats can point at fever in cats. According to veterinarians, that is disbelief. The only way to know if a cat has a fever is to measure it. For that purpose, they recommend to measure cat’s temperature rectally or use a specially designed thermometer to take the temperature from a cat’s ear. Rectal temperature should be in the range from 38.1C (100F) to 39.4C (102.5F). Each temperature that exceeds 39C or 102 F is considered high temperature and need prompt intervention.

Tags: Symptoms of Fever in Cats