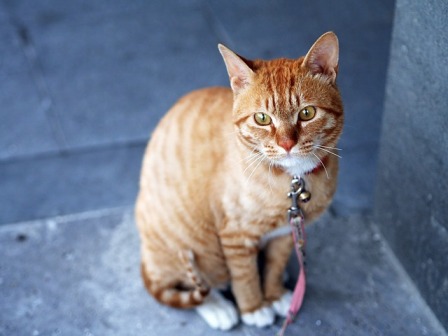 Hyperthyroidism is a disease of the thyroid gland that multiplies the number of its cells, causing its enlargement and hyperproduction of the thyroid hormones. Usually, the enlargement of the thyroid gland is benign; only 2 percent of cats can suffer from thyroid carcinoma. Fortunately, this disease rarely affects young cats. Typically, it appears in cats older than 10 years. Although experts still do not know what exactly causes hyperthyroidism, there are some factors that can increase its risk. For example, the level of iodine, whether too low or too high can lead to disbalance in hormones. Also, soy as known as phytoestrogen, which takes part of almost 60 % in cat foods, can be one of the causes. The third possible reason can be chemicals PBDEs, which negative effect on the thyroid gland has been already proved. It finds in some kinds of fish and a house dust. To learn how to recognize the symptoms, the article “Hyperthyroidism in Cats” gives us the following list.

Weight loss and increased appetite are among the most common clinical signs of this condition. Weight loss is seen in 95 to 98 percent of hyperthyroid cats, and a hearty appetite in 67 to 81 percent. Excessive thirst, increased urination, hyperactivity, unkempt appearance, panting, diarrhea and increased shedding have also been reported. Vomiting is seen in about 50 percent of affected cats. Clinical signs are a result of the effect of increased T4 levels on various organ systems.

Even though diagnosing hyperthyroidism should not be complex and difficult, there are 2 – 10 percent of cats that can be misdiagnosed. The reason for this can be the very beginning of the disease. Another set of reasons can come from hormonal fluctuations. Often, there are some periods during the day when the hormones can settle on their regular level. In many older cats, the presence of other serious illness can mask hyperthyroidism and make its diagnosing difficult and hard to determine. In any case, if we have in mind the common symptoms of hyperthyroidism, it could be easier to be discovered. We know our cats very well, and only by observing the cat and its behavior, we can easily notice when something is wrong.

Tags: Symptoms of Hyperthyroidism in Cats