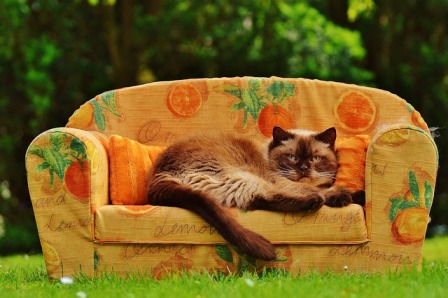 The British Shorthair belongs to the top of the list of the most popular cats, among the Siamese, Persians, and the Maine Coon cats. It is also the most popular cat in the United Kingdom, which is not unsurprising. Its origin has a long history, and it is considered that the breed originated from the ancestors of Egyptian cats, which had arrived in Britain from Roman Empire. The newly arrived cats were bred with wild native cats in Britain, and then the best examples were bred with each other and produce this beautiful pedigree breed. The breed gained its recognition in 1871. Since then, nothing much has changed in their appearance, nor in their temperament. The British Shorthair cats come in many colors, and the most common is the British Blue. Other colors of the breed are silver, golden, cream, white, and black, and regarding their coat pattern, they can be a solid color, tabby, and colorpoint. The article “The British Shorthair: Cat Breed FAQ” gives us additional information about the British Shorthair characteristics and temperament.

The British standard calls for the cat to be of compact build, powerful and well-balanced. A full broad chest, short strong legs, rounded paws and a tail that is thick at the base and tapers slightly to a rounded tip show off a “football player” physique. The British Shorthair has a round head with good width between the ears. The eyes are round and wide-open. One of the most appealing features are the “Brit’s” built-in smile caused by the round prominent whisker pads. This smile was never displayed better than in Lewis Carroll’s Cheshire cat; originally a tabby British Shorthair. The British Shorthair coat is like no other; short, dense, like deep pile carpet. The coat needs minimal care yet has a luxurious feel.

British Shorthairs are very affectionate, quietly following you from room to room until they can settle contentedly by your side. Gifted with lasting patience and confidence, Brits are especially good with children and other types of pets. A moderately active cat, they are not destructive as a breed, adapting well to any size household. British are very easy going and are affectionate to numerous people in the circle they consider family.

The British Shorthair is kind of breed that needs more time to mature in comparison with other cats. Interestingly, they need almost three years to reach the point of their full physical maturity, which makes them more playful and sprightly. They belong to long-lived and healthy breed. Their life span can stretch from 14 to 20 years. According to statistics, 54% of the British Shorthair live more than 12.5 years. As the one of the healthiest cat’s breed, the British Shorthair is prone to heart and kidney diseases. Veterinarians also report their tendency to develop hemophilia to a lesser degree. Unlike other cats with rich, beautiful, and colorful fur, they do not need much grooming because their coat is compact, dense and has only one layer. As a friendly and affectionate breed that do not require a lot of care, they can be a pleasant and undemanding company that prefers indoor activities.