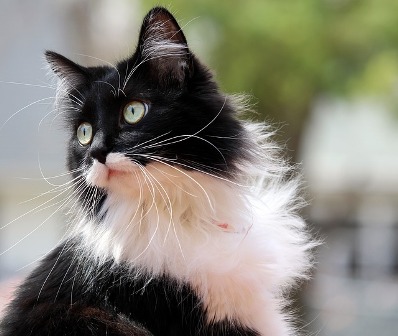 Cats differ among themselves by their breed, personality, and color. Some breeds, colors or color patterns are more popular than others. One of the most popular types of cats is tuxedo cats, which do not represent any particular breed, but are simply bi-colored cats with a specific pattern called ‘tuxedo.’ A typical tuxedo cat has a black coat with the white parts around its neck, chest, and belly. It can also wear so-called white socks or white boots. The tuxedo cats can also have the whole head covered with black fur, or only the upper head enveloped with black hair, giving the impression of wearing a black mask. Interestingly, many black and white cats are out there, but are not the tuxedo. What makes the tuxedo cats unique and adorable is a sense of elegance they radiate around. Because of their specific black and white pattern, they appear as wearing a tuxedo and it always seems so elegant, noble and amazing. Maybe it is the very reason the owners of tuxedo cats attribute to them some human characteristics. Many owners consider them as smart, affectionate, and friendly. The article “Facts about Tuxedo Cats” describes personality traits that owners have noticed or attributed to them.

1. Superior Intelligence of Tuxedo Cats
Tuxedo cats (or TCs) are significantly more intelligent than regular cats (including all other breeds and varieties). Research indicates that this difference may be as great as 200%.
Other cats living in the same households as TCs benefit from this and may see temporary increases in intelligence of 5-10%.

2. Environment of the Tuxedo Cat
People who have agreed to serve TCs as food providers and toy throwers are more attractive than the average humans.
Dogs are afraid of TCs.

People who win lotteries are statistically more likely to live with TCs.

Plants grown in houses where TCs reside are healthier and generally 20-50% larger than plants in non-TC households.

Tuxedo cats do not necessarily appear in white and black colors only. They can come in white and gray as well as white and tabby combinations of colors. Even though there is no scientific proof of specific personality type of tuxedo cats, one German study found out that tuxedo cats tend to explore their environment much further from their homes than other cats. Maybe this fact can explain why so many owners of tuxedo cats consider them extroverted, smart, and full of energy. For those who adore tuxedo cats, no matter whether the rumors of their personalities are true or not, they can find these bi-colored cats in many breeds such as American curl, American Shorthair, Persian, British Shorthair, Siberian, Devon Rex, Maine coon, Manx, as well as in domestic cats.