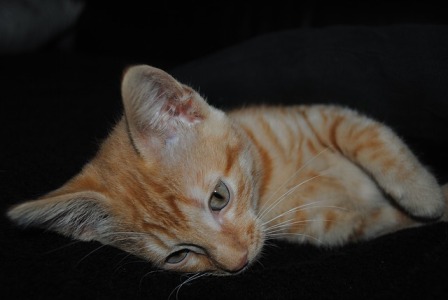 The majority of cats can sooner or later suffer from at least one of the common illnesses typical for cats, which first symptoms are usually difficult to notice. In the wild, cats used to hide the illness, because it made them weak and threatened their survival. Even though, many of them do not live in the wild anymore, they retain their protective attitude and continue hiding the symptoms of illnesses, even from their owners. That is why the owners should be aware of any subtle change in cat behavior, habits, and appearance of their body. The most common illnesses that can easily affect any cat are worms, viruses and bacteria, diarrhea, vomiting, feline gingivitis, urinary tract disease, and kidney problems. Some breeds are particularly prone to specific disease like Persians propensity to respiratory infections. In order to recognize the signs of cat’s illness, the article “10 More Subtle Signs of Illness in Cats” gives us useful suggestions.

Changes in interactions: A previously clingy cat acting uncharacteristically aloof, or an independent cat transforming into “Velcro kitty” are examples.
Changes in activity: A decrease or increase in activity, and change in the cat’s daily routine are red flags — of arthritis, for example, which is far more common in cats than previously thought. So a cat who jumps on furniture less often is a potential sign.
Changes in chewing or eating habits: Contrary to popular belief, most cats are not finicky eaters. Look for changes, an increase or decrease, in a cat’s food intake. Eating less can signify several disorders, including dental problems. Increased appetite may mean diabetes or hyperthyroidism.
Changes in water intake: Drinking more or less can indicate a cat health problem, such as diabetes orkidney disease.
Unexpected weight loss or weight gain: Weight doesn’t always go up or down with a change in appetite. Cats with diabetes or hyperthyroidism, for example, may lose weight even if they eat more.
Bad breath: If those pearly whites don’t smell sweet as a daisy, something may be rotten in the mouth, or perhaps kidney disease or a digestive disorder.
Changes in grooming habits: Fastidious groomers letting themselves go — even just a bit — is a sure sign of potential illness. Over-grooming may be related to stress, pain or allergies.
Changes in sleeping habits: From catnapping more to awaking in the middle of the night, the explanation may be pain and/or illness, perhaps associated with aging.
Changes in vocalization: Wallflowers that begin to offer sermons or cat howling overnight may be doing so as a result of a medical condition. Possible explanations include hyperthyroidism, hypertension (high blood pressure) or anxiety.
Signs of stress: Cats dislike changes more than anything. Changes in your family’s schedule, new pets coming or going, or even rearranging the furniture can cause stress. A cat that isn’t feeling well may be anxious as a result. Geriatric cats may be especially prone to stress. Anxious cats might exhibit behavioral changes (such as missing the litter box). Anxiety requires the same professional attention as diabetes or a heart condition.

As responsible owners, we should, from time to time, carefully observe our feline friend and watch out for any unusual change in its appearance and behavior. Cats are creatures of habit; thus it would not be so hard to notice the changes in their habits. For example, if a cat sleeps longer than usual, and it is not raining outside, then it could be a sign that something is going on. Or, the changes in litter box can refer to a possible health issue. We can, also, notice the changes in its behavior when a cat does not show much interest in playing or its body language does not express confidence as normally. In that case, we can conclude that something inside disturbs it and go to the vet. Visiting vet will help us to unravel the enigma around the cat’s health condition and get clearer about it.

Tags: What Are the Signs of Cat's Illness?