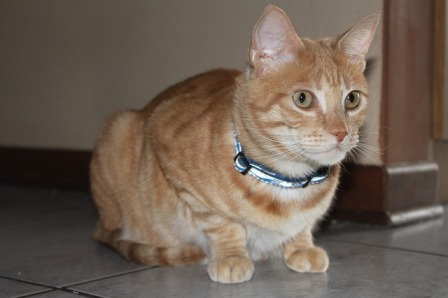 A cat’s behavior always amazes cat’s owners, because it represents a specific language, which is exclusively used by cats. This language consists of vocal sounds, specific behavior, and body language. An interesting fact is that they have developed a unique set of sounds to transmit their messages, because they did not know how to communicate in our way. Even though cat’s vocalization help humans to better understand their beautiful pets, it still leaves more space for confusion. And just when the owners think they know all about cat’s behavior, certain posture can baffle them again. One of these puzzling behaviors is cat crouching. Seeing the cat crouching somewhere in the house, can make the owner scratching her/his head and ask her/himself: “What does it mean when my cat crouches? Is it normal? Or, should I worry about it?“ The article “Why Does My Cat Crouch?“ gives us some clues to question “ What does it mean when a cat crouches?“.

The Stalker Cat Crouch
Is your cat wiggling into a crouch or slinking low to the ground? Are his eyes narrowed and his butt up in the air? Is his tail flicking back and forth and back and forth (and back and forth)? He’s probably stalking prey.
Your cat coils and creeps when he’s on the prowl. Crouching keeps his muscles taut and ready for sudden swift strikes. You may not see the target — it could be a bug he sees, another cat he hears, a rodent he smells or your feet, to which any of those senses may apply — but he’s preparing an attack.

The Wary Cat Crouch
Is your cat crouching low to the ground? Are his eyes wide and his pupils dilated? Is his back arched and his tail erect? He’s likely feeling fearful or defensive.
When your cat crouches warily he may be bracing for a fight or flight. It’s not unusual for cats in this position to move sideways, perpendicular from a threat. It makes him look larger and gets him one step closer to a quick escape or flanking attack.

The Submissive Cat Crouch
Is your cat crouching on an even keel? Is he avoiding eye contact? Are his ears back and is his tail tucked between his legs? He’s probably showing submissiveness.
If your cat crouches this way, he may be trying to avoid a fight with another animal by showing deference and capitulation. This crouch makes him look smaller and less threatening to a potential foe. He may even lie on his back, belly up, as if to expose his organs as an act of contrition.

The Plain Old Cat Crouch
Is your cat just crouching? Like, nothing else is happening other than that the cat is crouching? And maybe he closes his eyes and even falls asleep? He’s probably resting.
If your cat was an electronic device, crouching would be the position he assumed after a factory reset. Crouching is a normal way for your cat to relax. The position allows him to be more alert than when he lies down, but less alert than when he stands. It’s the best of both worlds, at least for cats.

As shown before, there is no simple answer about cat’s crouching behavior. The ambiguity characterizes this posture and often puzzles cat’s owners. In order to understand the cat’s crouching correctly, it is necessary to observe every particular sign of its body language. Only when combining these two – posture and body language – the cat’s owner can gain realistic perspective. It is especially important, because the cat crouching can indicate hidden illness. Cats are known as silent patients, and they will do anything to hide the signs of disease. For them, it is about survival. A common disease that can lie behind the cat’s crouching posture is arthritis, particularly if the cat is old. When cat crouching is followed with lowered ears and diverted eyes, then it is a time to see a vet.

Tags: What Does It Mean When a Cat Crouches?