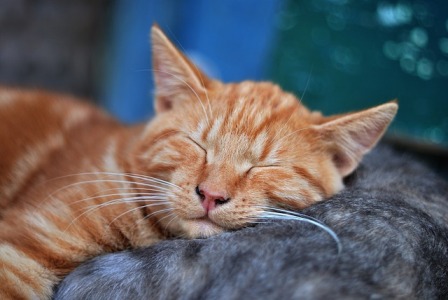 Cats are known as animals that sleep for too long and constantly nap during the day. It often seems as they only sleep and eat during the day. Many cats live this way in the winter months. As cat owners, we are familiar with the cat’s sleeping routine, but sometimes many of us wonder how much sleep is too much. And, what does it mean when a cat sleeps more than usual? According to feline experts, optimal sleeping time for a cat is 16 hours. For senior cats and kittens, this time amounts 18 hours. However, this ‘optimal time’ can vary depending on the weather, on cat’s lifestyle, or the presence of stimuli in its environment. Namely, every cat sleeps longer when it is rainy and cloudy outside. Indoor cats usually sleep longer than outdoor cats, because of their lifestyle and fewer stimuli in their environment. Many cats sleep too much because they do not find something interesting to do than napping. Additionally, feline experts point out at the light cycle as one of the main factors that affect the sleeping patterns in cats. No wonder that winter months are periods of time when our furry friends sleep the longest. To find out more about sleeping patterns in cats, the article “Why Is Your Cat Sleeping More than Usual?” tries to answer the question: what does it mean when a cat sleeps more than usual.

Aging
You may be used to your cat sleeping a lot of hours, however as your cat gets older, he will tend to sleep more to conserve his energy.

Illness
A cat that is ill may sleep more than usual. This may be due to the fact that the body tries to fight the disease and requires more rest time.
If the cat sleeps more and this is accompanied by snoring, this may point to a respiratory problem.

Pregnancy
Pregnancy may cause the cat to sleep more. This may be due to the fact that the cat is no longer interested in mating and is preparing to have the kittens. In addition, the increased amount of hormones may also cause sleepiness.

Now, it is clearer what affects sleeping patterns in cats. However, feeding cycle is also important when considering this issue. Namely, many experts think that how much we feed cats, with what food, and how often, can also influence sleep patterns in cats. The more food a cat eats, the more it will sleep. They also suggest that degree of activity in their environment will make the cat sleep longer. For example, the larger number of people and animals are present in the household the lesser the cat will sleep. People and animals will naturally increase the level of activity, which make the cat more interested in taking part. Therefore, if illness does not make the cat sleep more than usual, there are many ways to keep the cat interested. Only the active cat is a healthy cat.

Tags: What Does It Mean When Cat Sleeps More than Usual?