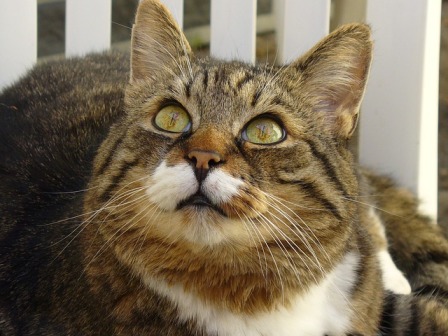 Cats have excellent sense of smell. It helps them to orientate themselves toward the source of food when young, and later for hunting and communicating with other cats. Their extraordinary sense of smell is about 14 times more sensitive than humans’. And the cat’s nose is completely unique; its print is different for every cat, something like a fingerprint in man. It contains the special pattern, which shape and layout is entirely unique and authentic for every cat. The cat’s nose is usually wet and calm, but sometimes it can be warm and dry. This phenomenon is not troublesome by itself. We can be alarmed and take our pet to the veterinarian, if only other symptoms are present. A cat’s nose has an area around the nostrils that is known as nose leather. Its color varies and depends on many factors. The most important one is the color of their fur. Even though the color of the cat’s nose can vary among cats, it can also change the color in one single cat. The article “Two Things About Your Pet’s Nose You Should Know” explains what affects the cat’s nose to change its color.

The color of your pet’s nose can be black, pink (a pink nose is also called a Dudley nose), liver colored, or the same color as your dog’s or cat’s fur. Nose color is determined by genetics.
Some noses fade during the colder months and return to their normal color during the summer months. This is a condition known as ‘snow nose’ or ‘winter nose.’
Certain breeds have noses that go from black to brown or pink as the dog ages. This is thought to be a result of the breakdown of tyrosinase, which is an enzyme that produces pigment. Since tyrosinase is also temperature-sensitive and works more efficiently in warmer weather, this could also explain the ‘winter nose’ color some dogs get when the weather gets cold.
If you happen to have an orange or calico kitty, you might notice that black spots appear on the nose and lips as your pet gets older. This is a totally normal change veterinarians call lentigo simplex, and it’s no cause for concern.
Sometimes the nose will go lighter when the pet is sick and return to a darker color once health is restored. If a pet gets a scrape or other abrasion to the nose, often the nose skin will turn pink as the healing process is occurring, and then the darker natural color will appear as the scab wears away.
Contact dermatitis can also cause your dog or cat to lose pigment on the nose. Some pets have sensitivity to plastic food and water bowls, and continued exposure can cause the nose to lighten in color. Sometimes the lips will also become inflamed.
I recommend you use stainless steel food and water bowls, because aside from the potential for plastic hypersensitivities, plastics wear down over time, and the material in plastic bowls can leach into your pet’s food and water.
The immune disease called vitiligo can also turn a dog’s nose pink, but there are usually other signs of this disorder occurring at the same time, like your dog can have white hairs or entire patches of white hair all over her body.
With vitiligo, the immune system attacks the pigment-containing cells of the body that are responsible for color. Certain breeds seem more likely to develop vitiligo than others including Dobermans, German shepherds, Rottweilers, and Dachshunds.

The dryness and warmth of the cat’s nose usually appear when the cat is outside, lying in the sun for long hours. During winter days, the cat’s nose can lose its natural calmness and humidity due to cat’s affinity to lie near the source of heat. Due to their extreme cleanliness, their noses can lose its moisture because of licking. Although many owners tend to worry because of dryness and warmth of the cat’s nose, there is nothing to worry about. Veterinarians suggest visiting the vet only in case of vomiting, losing appetite, thirst, diarrhea and weight loss. Even the nose leather can get flakes; it could be a good idea to see the vet because he/she can help if some dermatological issue emerges.

Tags: Why Cat's Nose Can Change Its Color?