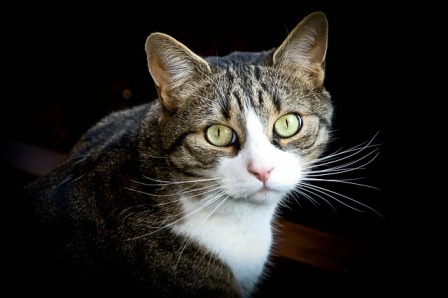 Cats are known as animals that have a highly developed sixth sense. Even though we lack scientific evidence for this claim, many people, especially cat owners, firmly believe in cats’ supernatural abilities. Like many other animals, cats can predict earthquakes. There is huge evidence of cats that behave weird or simply leave their home before the earthquake has happened. Experts assign the natural ability of cats of sensing earthquakes to their powerful senses, which are better in tune with nature and its cycles than humans’. They explain that cats can feel the changes in the Earth’s magnetic field that enable them to prepare in advance for a sudden disaster. They are equipped with senses that can detect even slightest tremors on the Earth’s surface. The article “Can Cats Predict Earthquakes?” depicts some theories that explain this extraordinary trait of cats.

Infrasonic Sound
Perhaps a more convincing theory proposes that cats and other animals can pick up on the infrasonic sound pulses that are created by earthquakes and storms. These low frequency sound pulses are out of the human limits of hearing. Either by instinct or from experience, such sound could act as a warning signal to your feline friend cautioning them to take cover.

Electrical Charges and Ions
Another theory suggests that cats and other animals may be able to detect or simply better detect electrical charges in the air. It has been theorized that a flow of ions, or electrically charged air, is created by the friction of the Earth’s tectonic plates rubbing together prior to an earthquake. The electrostatic charges preceding an earthquake may serve as a warning to an animal with a heightened sensitivity.

Vibrations
Even others think it’s much simpler than that. In general, cats may have a heightened sensitivity that allows them to feel the small tremors of an earthquake before their human friends. If that is so, it is suggested that they are responding to the P-waves of an earthquake – the waves and vibrations that travel twice as fast as the S-waves that are attributed to the real earthquake shaking.

As we have seen, cats‘ sharp senses handle their extraordinary ability to predict earthquakes. There is no straight answer for this phenomenon, only various theories that try to explain this unique trait. Cats can sense the changes in atmospheric pressure, changes in vibrations, ground distortions, gravity changes, etc. Whatever the initial cause can be, their behavior appears unusual and odd before the forthcoming earthquake. Cats usually react with fear, especially the ones that have already experienced an earthquake. They can also react strangely for many other reasons such as illnesses or some other event. To make a cat safe in those situations, experts recommend to keep the cat indoors and distract it with its favorite treat.

Tags: How Do Cats Predict Earthquakes?