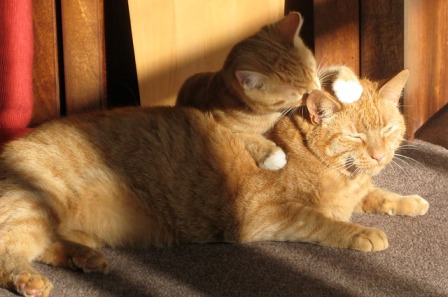 Cats spend about the third of their life in grooming themselves. They use this activity regularly to make themselves clean and protected from other predators. Their saliva contains enzymes that prevent their skin from infection. Even though they groom themselves from various reasons that benefit their health, they also use this activity to bond with other cats and show their affection. According to veterinarians, kittens learn basic social skills from their mother in their early kittenhood; she teaches them by grooming how to bond with each other. This warm and calm feeling is deeply ingrained in their system, and that is why they are grooming themselves when anxious. They lick themselves to soothe and relax and use grooming to comfort another cat. This type of grooming is called a social grooming and is always directed to the head and neck of another cat. Thus, when an outdoor cat appears wet on its head, we can be sure that it found a close friend. The article “Why Do Cats Lick Each Other?“ explains a few simple reasons why cats groom each other.

1. To Remove Ick After Birth

Mother cats begin licking their kittens from the minute they are born. They do this grooming to remove all the debris and fluids associated with the birth as well as to get the kittens breathing.
It is an inherent behavior, meaning they do this without even really thinking about it.

Cats treat grooming as a pastime. They can spend hours cleaning themselves and each other. They show their love and affection this way.
I once had a tortoiseshell kitten who loved to groom my husband. She would sit on the back of the couch and comb his hair with her claws for what seemed like hours. (My husband drew the line at the “licking his head” part.)

3. To Reach Those Difficult Spots

Cats might clean each other because there are certain spots that are hard for them to reach on their own.
I’m sure you’ve seen your cat wetting her paws and then washing her face. The face is a hard place to wash. The 2-cat home makes it easier. Feline friends don’t let feline friends walk around with dirty faces.
Cats will often clean each other’s ears. Again, this is a hard-to-reach spot for the lone pet. Dual-pet households make this chore simpler. One kitten will wash the other’s ears inside and out. As gross as it sounds, it’s actually a good thing because it removes dirt.

Interestingly, cats’ grooming behavior is often connected with dominance. Usually, a cat who grooms the other one shows as more dominant and protective toward another. Many owners have experienced their cats fighting at first and then licking each other, where the stronger cat licks the weaker, which seems as it does not enjoy this licking game at all. For other cats, this does not appear so much ambivalent; it can be more peaceful and bonding activity, where the both cats – the groomer and groomee enjoy equally. These cats make a special bond that connects them closely and gives them a feeling of belonging to members of the family. They use this unique way of expression to show how much they love and care about each other.

Tags: Why Do Cats Groom Each Other?