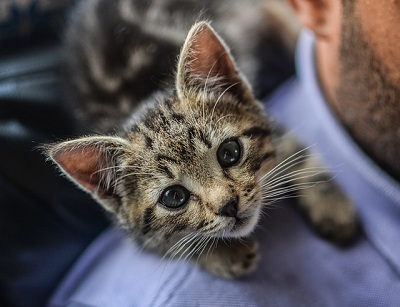 We all know the likely scenario when a cat meets new people – she goes straight ahead to a person that overtly ignore her. It is usually a non-cat person or a person who is allergic to cats. And this behavior is one of the weirdest behavior they seem to share. But, what causes this strange behavior? And, why are cats attracted to people who do not like them? Feline experts believe that this behavior, as many others, has its roots in cats’ development. Namely, in the world of cats staring is not a polite gesture. They see it as threatening and aggressive. Cats stare at each other when want to establish their dominance of a territory. Thus, staring is a way to determine which cat has more power and strength. For that reason, when cat people try to approach a cat stretching their arms and look straight at her, that makes her feel bad. A cat sees this kind of behavior as aggressive. On the other hand, a person who tries to ignore her gets the most credits and looks like safe and non-threatening at all. To find out more about why are cats attracted to people who do not like them, the article “Are Cats Really Attracted to People Who Are Allergic to Them?” gives us the following explanation.

A more likely explanation for the interactions that allergic people have with cats
is that most of these people try to avoid or ignore the cats they encounter so that they can
minimize their allergic reactions. Many cats are initially shy around unfamiliar people.
They are often fearful and avoid people that approach them, try to touch them or pick
them up. Cats seem to be less fearful and more friendly to people that do not initially try
to approach or touch them but that just sit quietly and let the cats approach them first. So
when the allergic person ignores the cat, it reduces her fears and makes her more likely
to approach and interact in a friendly way, rubbing up against the person, soliciting
petting and trying to get into the person’s lap. If the allergic person yells at the cat,
pushes her away, or does other aversive things, the cat is likely to leave, but she may try
to come back later if the person is again quiet.

However, we can learn a lot from people who do not like them but who attract cats. Feline experts think that the best strategy is to ignore a cat at first, then give her a knuckle. Usually, she will rub herself onto it and make a second approach. Only when a cat places her safely close to us, we can look her in the eyes and blink. If we are lucky enough she will return the blink. In cat language, mutual blinking means that we have made a friendship relation with a cat.

Tags: Why Are Cats Attracted to People Who Do Not Like Them?