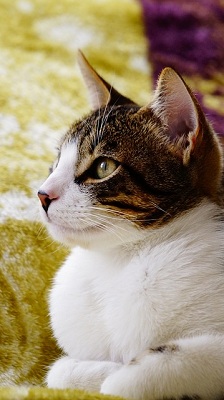 Since ancient times, cats have been considered as mysterious creatures that possess some form of unnatural power. Today, many cat owners believe cats can remove negative energy from their bodies and from their space. Some of them believe cats have a spiritual purpose in our lives and they do not appear accidentally on a front porch. They report a cat appeared after divorce, financial breakdown or serious illness. It is not unusual that neglected kids or kids that go through hard times in school or in their family suddenly show a desire to adopt a cat. Many studies have confirmed the health benefits of having a cat. One of the best known benefits is the cats’ ability to help us relieve stress and lower our blood pressure. Esoteric experts claim that cats absorb negative energy from our bodies and from space where we live. According to them, cats somehow know where in our body the problem appears. Cats go directly to that spot, lie down, and stay until all the negativity is not removed. To find out more whether cats remove negative energy, the article “The Healing Powers of Cats”gives us the interesting explanation.

Research has even shown that the frequency of a cat’s purr can aid with healing of bones, tendons, ligaments, and muscles as well as provide pain relief. These healer kitties would work their magic in various ways:

• By curling up next to a recovering cat or dog

• By cuddling up to a worried client in the waiting room

Cats seem to intuitively how to utilize the energy for their greatest good. They intuitively know where extra energy is needed and they also transmute the energy in the house in general.
Cats are sensitive to energies and have the ability to change negative energies into something peaceful and calming. Animals bring a spiritual component to healing as well. All cats do this to some degree.
While cats in particular have healing powers, research on pet companionship in general is also impressive. Research shows that people with pets:

• Need fewer visits to their doctor each year

Many owners agree that cats do not only remove negative energy, but they also help us with healing. By exploring cat’s purring, scientists have revealed that its frequency helps the broken bones heal faster and muscles being recovered rapidly. They also think it can help explain why cats far less likely to suffer broken bones than dogs. Using purring, they simply heal themselves. It might be the similar mechanism works when they curl up on a specific body part. They purr, radiating vibrations that alleviate ailments from the problematic organs. In any case, whether they send vibrations or remove negativity, the one thing is sure – they help us feel better.