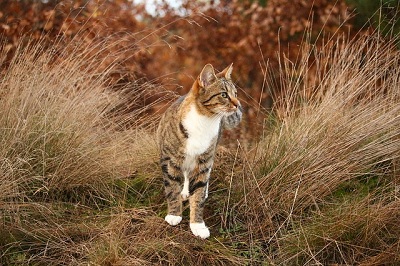 Unlikely dogs, it has been thought that cats have never been fully domesticated. During centuries, they have simply learned how to live close to humans with all the benefits it takes, but retaining a significant amount of independence. Today, every cat parent knows that a cat does not behave like other animals, dependent on humans. While dogs are fully obedient to their owners, cats rather behave as owners themselves. They expect their food will be on time and take full advantage of today’s modern, comfortable homes. However, some experts believe that theory about semi-domestic cats is not fully reliable. Each animal has its own story regarding domestication. What makes us think that cats are semi-domesticated is their specific nature and independence. Even though household cats depend on their owner for food and shelter, they will not show any sign of submission. They are completely comfortable as solitary animals, taking human’s service for granted. But, when and how cats become a part of our life? Until recently, we believe that the beginning feline domestication had happened in ancient Egypt when cats had appeared as a by-product of agriculture. Namely, it is believed that cat packs had come from Africa, because of mice and rats. They helped Egyptians to get rid of this huge trouble, gaining a status of deity, in turn. Recently, scientists have found more insights from other places in the world that might show cats were not domesticated just once. To learn more about how cats became a part of our life, the article “Were Cats Domesticated More Than Once?” gives us the following explanation.

But a big question remained. Were the Quanhucun cats related to Near Eastern wildcats (Felis silvestris lybica), the ancestors of today’s house cat and the first cats to be domesticated about 10,000 years ago in the Middle East? Or were they a different species of feline, perhaps one of the small local wildcats such as the Central Asian wildcat (Felis silvestris ornata) or the leopard cat (Prionailurus bengalensis)? If the former, the cats likely came to Chinese farming villages via ancient trade routes and were already domesticated. If the latter, Chinese villagers may have embarked on a completely separate domestication of the cat from a local species.

And that’s indeed what the new study suggests. Scientists led by Jean-Denis Vigne, the director of research at the French National Centre for Scientific Research in Paris, performed additional analysis on the Quanhucun bones, as well as bones from two other ancient Chinese farming sites. They focused specifically on the mandibles, using a technique called geometric morphometrics, which employs a computer to take thousands of measurements of the size and shape of bones to determine what species they belong to. All of the bones unequivocally belonged to leopard cats, not a Near Eastern species, the team concludes this month in PLOS ONE.

Of all the domesticated animals, only pigs are believed to have been domesticated more than once. The fact that we might be seeing at least two separate domestications of cats—in different parts of the world, at different times, and from different species—suggests that farming may have been bound to give us the house cat, Vigne says. “The domestication of cats is a very special thing in the annals of domestication.”

As we have seen, the cats had the interesting path to becoming a part of our life. Whether they are semi- or fully- domesticated, we still love them just because they are the way they are.

Tags: How Did Cats Become a Part of Our Life?